Australia win fifth Ashes Test by an innings and 46 runs

Australia defeated England by an inning and 46 runs to narrow their defeat margin of the Ashes series 2015. With this win Australia dampen England’s Ashes celebration for some extent

Australia defeated England by an inning and 46 runs to narrow their defeat margin of the Ashes series 2015. With this win Australia dampen England’s Ashes celebration for some extent.

At the end of day 3, England were 203 for 6 and Australia needed only four English wickets to win the match. Peter Siddle provided the first breakthrough for Australia on day 4 when he trapped Mark Wood in front of the stumps for 6. Soon after this, Jos Butler chipped Mitchell Marsh at mid-off to Starc for 42. Play was also stopped due to rain for few hours and when it resumed it brought wickets for Australia. Moeen Ali and Stuart Broad had a good partnership going before the rain but Siddle bowled Broad for 11 when play resumed after rain. Siddle came into action again when Moeen Ali was caught behind for 35. 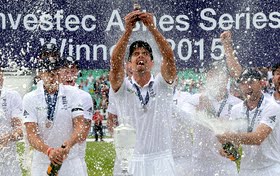 Peter Siddle claimed four wickets for 35-runs as Australia packed England for 286 runs in their second inning. But this result didn’t make any impact on the outcomes of the tournament as England captain Alastair Cook lifted the iconing urn after his team won the series 3-2. Consolations for the Australian will be that they sent their captain Micahle Clarke with a win. Clarke was given a standing ovation by the Oval crowd when Clarke led his team of field on day 4.

The hosts have now won four successive Ashes at home. After their defeat in 2001, England have Ashes in 2005, 2009, 2012 and now in 2015. Ashes is always a high intensity series and games are played for results. All five games in this series produced result. But one notable point in this series is that none of the five games went on day 5. First and second Test were finished within four day whereas third and fourth Test were finished within three day which England won and this fifth Test finished on day 4 too.

Joe Root was choosen Man of the Series for England as he played crucial inning on important juncture of the match in a bowler friendly conditions. Root had struck century at Cardiff when England were reduced to 30 for 3 and then he again smashed century at Trent Bridge where all batsmen found it difficult to score.