India eased to a 6-wicket win with as many as 46 balls to spare in the 4th ODI at Colombo. With this effort, India has captured the Series as well with an unassailable lead of 3-1 with one more match to come.

India eased to a 6-wicket win with as many as 46 balls to spare in the 4th ODI at Colombo. With this effort, India has captured the Series as well with an unassailable lead of 3-1 with one more match to come. Virat Kohli was once again the nemesis for the Sri Lankan Lions as he piled up a 13th ODI century. Suresh Raina repeated his blistering batting show from the previous game to come up with a match-winning stand with Kohli.

India’s run chase received an early jolt when Gautam Gambhir (0) played all around an inswinging yorker from Lasith Malinga in the very first over. Sri Lanka couldn’t make further inroads as a restrained Virender Sehwag got a partnership going with Virat Kohli. In the 10th over, India lost its second wicket when Sehwag (34 from 29 balls with 6 fours) was caught with a leading edge at covers off Angelo Mathews. Next man Rohit Sharma failed to come good yet again, he lasted 14 balls for his 4 before he was out lbw to a pacy inswinger from Nuwan Pradeep. India at this stage felt the heat at 60 for 3 in 12.4 overs. 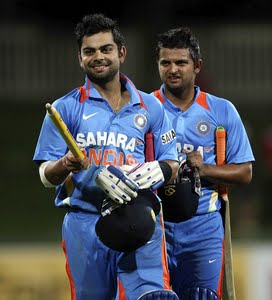 A confident Manoj Tiwary walked in to repair the damage with Kohli by playing some positive shots. After adding 49 runs to the Indian total, Manoj Tiwary (21 from 38 balls) departed after missing his forcing sweep shot to a flat delivery from leggie Jeevan Mendis which had him lbw. India was back in trouble at 109 for 4 in the 24th over when Suresh Raina joined Virat Kohli.

Incredibly, Suresh Raina never let the Lankan spinners to bog him down. Along with Kohli, Raina brought India back on the track. There was plenty of luck with both the batsmen as well. While Raina was put down by Mahela Jayawardene in the slips off Malinga, Kohli escaped a close lbw call after he was beaten for pace by Nuwan Pradeep. Raina took the match away from the Lankans in the 37th over when he swung Pradeep for an almighty six. From that stage, India accelerated towards the target of 252 in no time with even Virat Kohli deciding to play carefree cricket.

Part time leg-spinner Manoj Tiwary captured four wickets to help India restrict Sri Lanka to 251 for 8 in the 4th ODI at Colombo. India going into the match with just the four specialist bowlers was fortunate as its part-timers not only fill in a few overs but also made a huge impact in strangling the Sri Lankan batsmen on what looked like a slow batting surface.

Sri Lanka was off to a solid start once Dilshan and Tharanga saw through the two new balls. In the 16th over, there was a surprise as the batting powerplay was taken by the Lankans. While a few boundaries started to come by, Sri Lanka went onto lose the key wicket of Tillakaratne Dilshan (42 from 48 balls with 7 fours) when a top edged pull off Ashok Dinda skied up to MS Dhoni behind the stumps. Dilshan had put on 91 runs for the first wicket with Tharanga who threw his wicket right after getting to a 27th ODI fifty.

It was in the 22nd over, during the bowling powerplay that Upul Tharanga (51 from 73 balls with 4 fours and a six) came down the track too early for a big hit and got deceived in the flight by R Ashwin to get clean bowled. Sri Lanka now had two new batsmen at the crease in Dinesh Chandimal and Lahiru Thirimanne and things once again looked good as the youngsters batted sensibly. In the 32nd over, Manoj Tiwary in his very first over got the breakthrough for India when Chandimal (28 from 32 balls) pulled his long hop into the hands of mid wicket to end a 50-run stand.

Sri Lanka all of a sudden were under pressure at 155 for 4 in the 33rd over when Skipper Mahela Jayawardene (3) was caught down the legside by Dhoni when his predetermined paddle sweep off Sehwag saw the ball kiss the bottom of his bat and lob up in the air. Just when the slog overs started, Angelo Mathews holed out to long off to give Manoj Tiwary a second wicket and left Sri Lanka at 190 for 5. Next man – Jeevan Mendis attempted too many reverse sweeps, and ended up missing one of those risky shots to get bowled round the legs by Manoj Tiwary with SL at 213 for 6 in 45.1 overs.

Tiwary added another big scalp when he had the dangerous Thisara Perera (2) holing out to long on as Sri Lanka slipped to 218 for 7 by the end of the 46th over. Six balls later, the well set no.3 bat Lahiru Thirimanne (47 from 69 balls) perished when he charged down the track too early and like Tharanga got bowled by an Ashwin drifter. Sri Lanka at 219 for 8 in 47 overs ended up with a decent looking 251 for 8 thanks to some late blows from Rangana Herath and Lasith Malinga with the two tail-enders striking three sixes!

MS Dhoni messed it up in the end by giving the last over to Manoj Tiwary who was taken for 18 runs. Apart from that one bad over, Manoj Tiwary had a great day with figures of 10-1-61-4. Ashwin came up with 2 for 46 in 10 overs, Sehwag produced 1 for 38 in 8 overs as Dhoni had an easy outing rotating plenty of spinners.

Toss and Teams Update: Sri Lanka have won the toss and elected to bat first in the 4th ODI at the R Premadasa Stadium in Colombo. The pitch for this match is drier than the one we saw in the third ODI. We could get another high scoring match like the other day.

The Lankans have made two changes with Lahiru Thirimanne and Nuwan Pradeep replacing the injured Kumar Sangakkara and Isuru Udana. India surprisingly have omitted leggie Rahul Sharma and replaced him with a specialist batsman in Manoj Tiwary.