Ravichandran Ashwin took six wickets to bowl out New Zealand for 236 runs in their second inning and by virtue of that India won the match by 197 runs.

Ravichandran Ashwin took six wickets to bowl out New Zealand for 236 runs in their second inning and by virtue of that India won the match by 197 runs. New Zealand fought hard this morning and not allowed Indian spinners to dictate the terms this morning. Visitors had a very stiff target to chase or say survive against Indian spinners to draw the game which is more practical. Overnight pair added 102 runs for the fifth wicket which frustrated the Indian bowling. They didn't lose any wicket in the first hour of the play today. Luke Ronchi and Santner provided resistant in the middle order for New Zealand but once this partnership was broken then there's not much left in the lineup for the visitor's. Ronchi (80) played aggressively, scored half-century but couldn't captailize much and played a rash sweep shot to be caught by Ashwin off Jadeja. India wanted his breakthrough badly and it opened the gate for them this morning.
Then Mohammad Shami utilized the old ball and earned reverse swing to claim couple of wickets. He dismissed dangerous looking Watling and then Craig. Once Santner started losing partners from the other end, he lost his concentration too and handed a catch to Rohit off Ashwin for well made 71. He looked very compact in this inning. Ashwin also took last two wickets and completed his 5th 10-wickets haul in Test.

At lunch, chasing a nominal 434, New Zealand were 205 for 7 with Santner still at the crease on a defiant 57. He had faced 160 balls in the innings and 267 in the match, in addition to bowling 55.2 overs of left-arm spin and picking up five wickets.

Ravindra Jadeja and Mohammed Shami give India the crucial breakthroughs in first session of the final day. 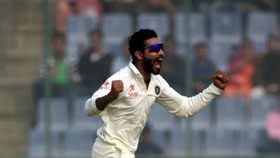