For the second game in a row, Zimbabwe came up with an impressive all-round performance, to defeat Bangladesh in the fourth T20 at Khulna by 18 runs, and square the series 2-2

For the second game in a row, Zimbabwe came up with an impressive all-round performance, to defeat Bangladesh in the fourth T20 at Khulna by 18 runs, and square the series 2-2. Batting first, the Zimbabweans put up a sizeable 180 for 4, with opener Hamilton Masakadza standing up with an unbeaten 93. Tendai Chisoro and Neville Madziva then combined to pick seven wickets between themselves to put the lid on the hosts. Mahmudullah returned to form with a half-century, but it was not enough for Bangladesh to get past the finish line as they were bowled out in 19 overs.

Although Zimbabwe finished their innings on a high, they did not begin that well with the bat. Vusi Sibanda was sent back by Mashrafe Mortaza in the very first over of the match. But, Masakadza found good support in Richmond Mutumbami, who chipped in with 32 from 25 balls. He hit three fours and a six before being bowled by Abu Hider. Masakadza and Malcolm Waller then continued the good work for the visitors. The duo took the score from 84 to 145 when Waller was dismissed. His 36 featured three sixes in 18 balls. He was eventually bowled by Taskin Ahmed. 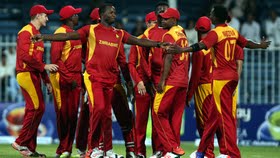 Even as the support act came from the other end, Masakadza also ensured the run rate never dipped, hitting a number of big boundaries. He remained unbeaten on a brilliant 93 from 58 balls, slamming eight fours and as many as five sixes. Zimbabwe also had luck going their way as Bangladesh were uncharacteristic in the field. Mutumbami was dropping by Taskin at short fine leg. Masakadza also got a life when on 36, and made Bangladesh pay for it dearly. Not a single Bangladesh bowler conceded under 8 runs an over.

When it was their turn to bat, Bangladesh collapsed for the second game in a row. Openers Soumya Sarkar and Tamim Iqbal in the second over of the chase itself, and the hosts could never recover from the big early losses. Sarkar hit a four and six but was caught behind for 11 off Madziva. A couple of deliveries later, it was time for Iqbal to walk back, as Madziva clean bowled him. Very first ball of the next over, Chisoro had the in-form Sabbir Rahman caught for 1. With him went, possibly, the hosts’ best chance of chasing down the target.

Chisoro soon went on to bowl Shakib Al Hasan as Bangladesh collapsed to 17 for 4. Imrul Kayes and Mahmudullah took the score past 50, but the partnership was broken when he tried to hit out against Sikandar Raza. Bangladesh stayed in the game thanks to a 57-run sixth-wicket partnership between Mahmudullah and Nurul Hasan. Raza again broke the alliance, claiming Hasan. Mahmudullah edged and heaved his way to a half-century, but fell for 54 as Chisoro bowled him. Mortaza slammed a couple of sixes, but it was too late in the day as Bangladesh were cleaned up for 162 to lose the contest.