Afridi: Lot of warmth between me and Kohli

"My relationship with Virat is not dictated by political situation. Virat is a fantastic human being and an ambassador of cricket for his country, just like I am for my country," Afridi said in an NDTV report.

"He has always shown a lot of respect and has even gone out of his way to present a signed jersey for my foundation (Shahid Afridi Foundation)," he added. The report added that Afridi's foundation looks to providing clean and safe drinking water to weaker sections of society. 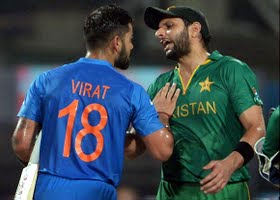 "There is a lot of warmth and fellow-feeling whenever I have spoken to Virat. It's not that we get a chance to speak a lot but from time to time, he would drop in a message and I would do the same. I congratulated him recently when I came to know the he was getting married.