Indian T20 Cricket 2019 Final: Why Rohit went to Malinga despite the 20-run over

The 2019 Indian T20 League final was as pulsating as fans would have hoped -- going down to the very end, with the margin of victory being just one run in favor of Mumbai

The 2019 Indian T20 League final was as pulsating as fans would have hoped -- going down to the very end, with the margin of victory being just one run in favor of Mumbai. With the triumph, Mumbai became the first team to win four Indian T20 titles as they beat Chennai for the third time in a final.

Chasing 150, Chennai crumbled to 82 for 4. However, brilliant 80 from Shane Watson kept them in the hunt. He was run out in the last over though looking to retain the strike after which Lasith Malinga trapped Shardul Thakur lbw to seal the trophy as Chennai once again fell at the final hurdle. They have now lost five finals in eight attempts.

Post the match, a jubilant Rohit Sharma was all praise for Malinga, who was given the last over despite conceding 20 runs in his previous over and defended nine runs to clinch the match for his side in terrific fashion. Malinga has been expensive this season, yet brought all his experience to the fore and delivered when it mattered most. 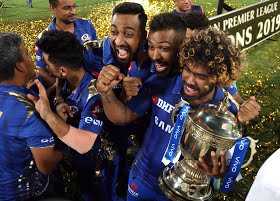 "About Malinga, that's what champions do. I had confidence in him despite a poor third over. He also had confidence he could do it. I thought we could use Hardik for the 20th but wanted to back someone who has done it for us. Malinga has done it many times in the past, so not a very difficult decision," Rohit said to the host broadcaster after another title win.

Mumbai coach Mahela Jayawardene also praised Rohit for his tactically brilliant moves. "Thought we had the game when MS got out, but then Watto started hitting. Some great decisions by Rohit, going back to experienced bowlers at the death. This is why we wanted to defend," Jayawardene told the broadcaster after Mumbai's win.

After the loss, MS Dhoni maintained his humor and said it was a game where the teams kept passing on the trophy to each other. "As a team, we had a good season. But we need to go back and reflect. Wasn't one of those years where we played very good cricket. Middle order never clicked, but somehow we managed. Today was one game we should've done slightly better. It was quite a funny game, we were passing the trophy to each other. Both committed mistakes, and eventually the winning team was the one that committed one mistake less," Dhoni said at the post-match presentation.