Sydney Sixers kept their winning streak intact by defeating the Nashua Titans in a thrilling Semi Final match at the SuperSport Park in Centurion.

Sydney Sixers kept their winning streak intact by defeating the Nashua Titans in a thrilling Semi Final match at the SuperSport Park in Centurion. The Sydney Sixers led by Brad Haddin will clash with the Highveld Lions on Sunday in the CLT20 2012 Final at Johannesburg.

With rain staying away, Centurion witnessed a nerve-wrecking contest between the Titans and the Sydney Sixers. Batting first after winning the toss, the Titans stuttered at 82 for 5 in 13.3 overs and were heading towards a modest total. However, a blinder of a knock from David Wiese of 61* (from 28 balls with 6 fours and 4 sixes) took the Titans to 163 for 5. Opener Henry Davids played the sheet anchor’s role with an unbeaten 59 (from 44 balls with 3 fours and 3 sixes).

Fast bowler Josh Hazlewood with 4-0-19-1 and left-arm spinner Steve O’Keefe with 4-0-19-0 were the bowling stars for the Sydney Sixers. Mitchell Starc picked up 2 for 33 while Pat Cummins was taken to the cleaners as he went for 51 runs in 4 overs. 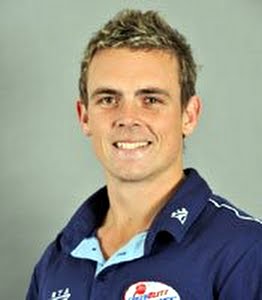 Sydney Sixers got off to a breezy start of 54 for 1 in 4.5 overs in their run chase. Michael Lumb was the first to depart after a cameo of 33 (from 19 balls with 6 fours and a six). His fellow opener Steve O’Keefe contributed 32 (from 21 balls with 6 fours) to add up to his superb bowling show earlier. O’Keefe would later go onto be the Man of the Match for his all-round performance.

Just when the Sixers seemed to be on track, a slight middle order setback put them off. The Titans came back strongly when they reduced the Sixers to 132 for 7 in 16.1 overs. Fortunately for the Sixers, Pat Cummins who was expensive with the ball made up for that with a match-winning cameo of 14* from 10 balls (with a six). The Sixers pulled off victory despite needing 8 runs to get from the final over which they did so in the final ball of the match with just the two wickets in hand.

On the bowling side, Roelof van der Merwe bowled out his 4 overs giving away just 23 runs and taking a wicket. Alfonso Thomas picked up 2 for 36 in his 4 overs. With this tight victory, the Sydney Sixers with five straight wins go unbeaten into the big Final.

Toss and Teams: Titans have won the toss and elected to bat first against the Sydney Sixers in the second Semi Final at the SuperSport Park in Centurion. The Sydney Sixers have made one change with Ben Rohrer taking the place of Peter Nevill. Titans have retained the same team that played in the last game.

The weather could cause some issues tonight and in case of a ‘no result’, there is a reserve day tomorrow when the match will be replayed.