Contests between India and Sri Lanka have been dominated by the former in recent times. And the just-concluded five-match ODI seriesand one T20 encounter was no different. As India basks in the glory of another triumph over Sri Lanka, we look back at the men who made the difference from India’s point of view.

Contests between India and Sri Lanka have been dominated by the former in recent times. And the just-concluded five-match ODI seriesand one T20 encounter was no different. As India basks in the glory of another triumph over Sri Lanka, we look back at the men who made the difference from India’s point of view.

Virat Kohli: Yet again, India’s number three stood up to the Sri Lankan challenge. He began the series on a bright note, with a ton at Hambantota that took the Indians to an easy win, and ended it his maiden T20 half-century, which also resulted in an Indian victory. He also scored a fluent century at Colombo, which guided India to a series win. Kohli was in great form even going into the series. However, it was heartening watch him bat with a great sense of responsibility, not willing to throw his wicket away. If he continues in the same vein, nothing can stop Kohli from becoming the best batsman in the shorter formats of the game. 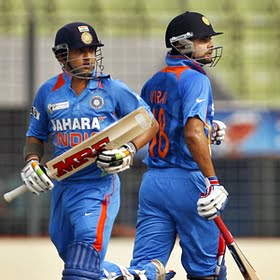 Gautam Gambhir: The left-handed opener provided India the solidity needed at the top of the order. He had a couple of failures, but played three knocks of authority, two of which won India games. His 65 in the second India was a great example of how to survive in testing conditions. However, the rest of the batting crumbled as India lost the encounter at Hambantota without much fight. The innings, meanwhile, proved that Gambhir was in form, and the left-hander capitalised on it, scoring a century and 88 at Colombo and Pallekele respectively. Gambhir’s dogged knocks played a major role in India clinching the ODI series easily.

Suresh Raina: The youngster’s Test credentials may be under a severe cloud, but when it comes to the shorter versions of the game, he is a completely transformed player. Raina had a wonderful series, coming lower down the order, and scoring runs at a fast pace. He looked at ease against the Sri Lankan attack, as his successful scores of 50, 65*, 58* and 34* would suggest. What Raina did very well during the entire series was find the boundaries every time the need arose.

Irfan Pathan: If Irfan did not believe in destiny at the start of the series, he would certainly have changed his mind by now. It was written that R. Vinay Kumar would get injured, and Irfan should get a chance in place of him. And how well he has responded. His five-for at Pallekele was his high point of the series, but he also played two crucial knocks with the bat, both of which helped India win games. He rounded off series with a wonderful display of swing bowling that undid the best Sri Lankan batsmen on show. Irfan Pathan is back, and with a bang, at least for now.