With the three-Test series tied 1-1, both Pakistan and Sri Lanka will look to go all out to clinch the series in the third Test at Pallekele. Pakistan won the first Test at Galle with ease while Sri Lanka fought back equally well to claim the second match at Colombo comprehensively.

With the three-Test series tied 1-1, both Pakistan and Sri Lanka will look to go all out to clinch the series in the third Test at Pallekele. Pakistan won the first Test at Galle with ease while Sri Lanka fought back equally well to claim the second match at Colombo comprehensively. The momentum will thus be with Sri Lanka. But, that definitely doesn't make them favourites. As Misbah-ul-Haq had stated in the preview to the match, Pakistan would seek inspiration from the manner in which the hosts fought back after having lost the first Test. If both teams perform to potential, we should have an intriguing finale.

With the Pallekele Test, Sri Lanka would be stepping into uncharted territory. It would be the first time in 15 years that their Test line-up would be without either Mahela Jayawardene or Kumar Sangakkara. The later has opted out of the third Test, and would only play the first two Tests against India before heading into retirement. Having a batting line-up without Sangakkara, Jayawardene, Tillakaratne Dilshan and Thilan Samaraweera, the latter two also having retired (Dilshan only from Tests), Sri Lanka would face a massive task in the batting department. But, every team goes into this rebuilding phase, and it remains to be seen how the batsmen respond. 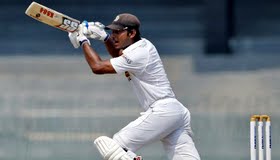 The walking away of the old guard also means that some of the newer players get a chance. Upul Tharanga has been recalled to the side in place of Sangakkara. And while he is, by no means, a newcomer, having been on the international scene for almost a decade, he is yet to establish his credentials as a Test batsman. He has a reasonable ODI record, briefly forming a formidable pair with Sanath Jayasuriya, and has even featured in a couple of World Cups. But, he now gets a chance to cement his Test place. Among the others, the likes of Dimuth Karunaratne and Kusal Perera need to stand up and deliver.

Both Pakistan and Sri Lanka have faced similar problems in the series, their inconsistency in batting and bowling. If Sri Lanka allowed Pakistan to make an incredible recovery after having them on the mat in the first Test, Pakistan collapsed inexplicably with the bat in the second. Their first innings score of 138 came back to haunt them, but they put up a poor show in the second innings as well. Azhar Ali batted wonderfully well for his hundred, and got good support from Ahmed Shehzad, but Pakistan need more out of their seniors like skipper Misbah and Younis Khan.

Pakistan have been dealt with a big blow in the bowling department as their best fast bowler Wahab Riaz has been ruled out. Yasir Shah has bowled brilliantly, and has been the most successful bowler from either side, but he hasn't found much in the form of support. Junaid Khan has struggled, and might well be replaced by Ehsan Adil or Rahat Ali. Mohammad Hafeez too cannot bowl as he his action has been declared suspect. Sri Lanka have done better with Dhammika Prasad leading the way and Dushmantha Chameera also getting among the wickets. But, Rangana Herath's lack of effectiveness will worry them.