Pakistan continued their great run in The Oval Test for the second consecutive day to clinch the match by an impressive margin of 10 wickets, and in the process draw the series 2-2. After Younis Khan took the game away from England on the previous day,

Pakistan continued their great run in The Oval Test for the second consecutive day to clinch the match by an impressive margin of 10 wickets, and in the process draw the series 2-2. After Younis Khan took the game away from England on the previous day, Wahab Riaz and Yasir Shah, who went into Sunday with three big wickets already against his name, sealed the deal in the visitors' favour rather comprehensively. The duo took wickets at key moments in the game, and while Jonny Bairstow resisted with his 81, all it did was prevent England from succumbing to an innings defeat.

Pakistan resumed the day with a significant deficit of 126 and six wickets in hand. And they would have been looking up to their two last-match heroes Bairstow and Moeen Ali to deliver again. And, while Bairstow carried on his impressive form in the series, it was Wahab's two wicket-burst off consecutive deliveries that all but sealed the match in Pakistan's favour. Bairstow played a rising delivery from the left-arm seamer on to the on-side, and set off for a single. But, Wahab was quick to pounce on the ball and throw down the stumps. Chris Woakes was the batsman at the other end, and he was clearly surprised by both the bowler's agility and his partner's call.

The dismissal of Woakes clearly left Bairstow harried, and he fell the very next ball, he drove Wahab straight to Azhar Ali at short cover who took a smart catch. At 209 for 8, the game had been decided. Pakistan were lucky that Wahab got his breakthroughs right in the nick of time, for a few overs later he was to be pulled out of the attack for transgressing on to the pitch. With Bairstow gone, the only aspect of interest in the game was whether England could avoid the follow on. And they did, thanks to some resistance from the lower order. Stuart Broad did not have a great series, and ended it by reverse-sweeping Yasir to slip, and give the spinner a five-for.

The last-wicket pair of James Anderson and Steven Finn took the score from 221 for 9 to 253 when debutant Iftikar Ahmed had his moment of glory, trapping Anderson lbw for 17 to set off celebrations in the Pakistan camp. There was hope for England when Bairstow was at the crease. After taking time to get his eye in, Bairstow eased his way to boundaries against the Pakistan left-armers. But, the visitors managed to get two big scalps in the first session. Gary Ballance, who had hung on gamely until then, fell to Sohail Khan unable to keep out a lifter from the right-seamer, edging it through to the keeper. 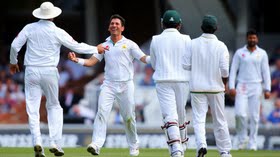 Moeen was another thorn in Pakistan's path to victory. He and Bairstow added 65 to revive England's hopes. Moeen even slammed at six of Yasir, perhaps trying to give back what he got. But, Yasir had his revenge just before lunch. He got Moeen with one that went straight and bounced a little. Sarfraz Ahmed juggled a bit but held on. In the end, Pakistan were set a target of 40 to win, and got there in style as Azhar Ali slammed a huge six. Pakistan ended the series as they had begun it, in emphatic fashion. What they also did with the triumph was dash England's hopes of becoming the number one team in the world.