The Mumbai Indians put up an allround show to easily romp all over Kolkata with 7 wickets in hand. With the ball, Chahar and Bumrah were impressive and later de Kock seamlessly batted through to take Mumbai to the top of the points table.

KKR was fielding a new captain today in the form of Eoin Morgan, who was handed over the reins after DK resigned to concentrate on his batting. Nevertheless, Morgan chose to bat first and he certainly would have hoped for a much better effort with the bat from his team. Tripathi and Gill gave them a sedate start, with only 18 runs coming from the first three overs. Tripathi was also dismissed off the last ball as Suryakumar Yadav took a screamer at point. Nitish Rana too went cheaply for 5 runs as Coulter Nile picked up his first this season.

Two overs later, Rahul Chahar broke the back of KKR’s middle order with wickets of Gill and DK in successive deliveries. Gill was set and tried to clear Chahar but ended up finding Pollard at long on. DK, on the other hand, was trying to paddle sweep but got bowled instead. At 43-4 inside eight overs, KKR were in trouble but they still had T20 stalwarts like Morgan and Russell at the crease. After a couple of overs, Russell was just getting in the mood for some onslaught before Bumrah cut short his innings with a treacherous bouncer. 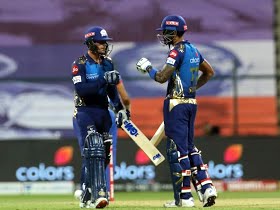 Cummins combined with Morgan to rebuild the innings but made sure that the scoring rate didn’t suffer. Although Morgan took time, Cummins smashed 15 off Coulter Nile in the 13th over, and also had success against Boult as he brought up his fifty. Morgan, who was quiet throughout the innings, finished in style with two sixes in the last over as KKR registered a fighting 148-5.

Chasing 149 was never going to be tough for MI, especially with Rohit and de Kock in such form. Rohit welcomed Chris Green to IPL with a boundary, and attacked Cummins and Krishna early on. Much like his skipper, de Kock hit a flurry of boundaries as they reached 51-0 inside the batting powerplay.

Varun Chakravarthy bowled a couple of tight overs, but the openers were unrelenting against pace and de Kock raced to his fifty in 25 balls. Rohit, whose scoring rate had slowed down, edged one off Mavi as KKR finally had a wicket. Even then, at 94-1, the required rate was hovering around 6 only. Chakravarthy was the only silver lining in an otherwise disappointing performance by KKR in the field, and was duly rewarded with the wicket of Suryakumar Yadav. Hardik Pandya joined de Kock and slogged Cummins effortlessly for 2 fours downtown, before a magical flick fetched him six runs. The match was closed down as early as the 17th over as de Kock(78) and Pandya(21) easily guided them home.