The opening day of the second Test at Sabina Park in Jamaica wasn't dominated by India in the way they were expected to but they were still a competitive 264 for 5 at stumps.

The opening day of the second Test at Sabina Park in Jamaica wasn't dominated by India in the way they were expected to but they were still a competitive 264 for 5 at stumps. The one big reason why the visitors did not run away with the game was because of Jason Holder, who kept India somewhat in check with figures of 3 for 39 from 20 overs.

On a pitch that had something for bowlers, Holder gave West Indies the early breakthrough, having the inconsistent KL Rahul caught in the slips by debutant Rahkeem Cornwall. The day got better for the latter as the off-spinner soon tasted his first success with the ball he had Cheteshwar Pujara caught by Shamarh Brooks at backward-point. It was the third low score of the series for Pujara.

With the side under some kind of trouble, skipper Kohli joined opener Mayank Agarwal out in the middle and the duo featured in a resurrecting stand of 69. Agarwal, after twin failures at Antigua, looked good and registered his third fifty of his short career. He once again failed to convert it into three figures though, falling to Holder for 55, once again caught by Cornwall at slip.

At the other end, Kohli looked set for another hundred. However, he became Holder's third victim, falling for 76, an innings which featured 10 fours. The dismissal gave West Indies an opening, however Hanuma Vihari (42 not out) and under-pressure Rishabh Pant (27 not out) ensured India ended the day in a reasonable position. 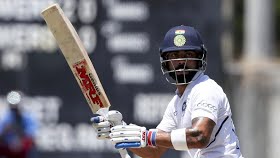 A victory at Jamaica would make Kohli the most successful Test captain ever, with 28 Test wins, overtaking MS Dhoni. It will also give India a 2-0 series win.

While India were unchanged from the first Test, West Indies made a couple of changes. Cornwall replaced Miguel Cummins from the first Test. Shai Hope's failed fitness test meant a Test cap for Jahmar Hamilton, the first cricketer from U.S. Virgin Islands to do so.

Ahead of the game, West Indies legend Vivian Richards fell ill and had to be taken off the field for medical treatment. It was later learnt that he suffered a heatstroke due to the hot and humid conditions.