Sri Lanka are almost there into the Semi Finals after beating West Indies by a big margin of 9 wickets with 28 balls to spare at Pallekele. The hosts made short work of the West Indian target of 130 by romping home in just 15.2 overs.

Sri Lanka are almost there into the Semi Finals after beating West Indies by a big margin of 9 wickets with 28 balls to spare at Pallekele. The hosts made short work of the West Indian target of 130 by romping home in just 15.2 overs. Skipper Mahela Jayawardene led from the front scoring a beautifully struck 65* (from 49 balls with 10 fours and a six). Kumar Sangakkara supported him in a century stand with a solid 39* (from 34 balls with 5 fours).

Mahela Jayawardene got the Man of the Match award for his classy knock ahead of Ajantha Mendis who earlier ensured that the West Indies were restricted to a low total. With this victory, Sri Lanka 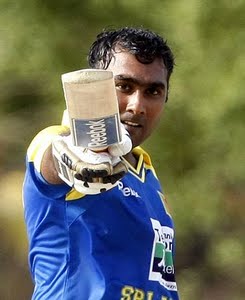 are favourites to seal a spot in the Semis. However, there is a possibility that three teams could end up with two wins each on Monday if England beats Sri Lanka and West Indies beats New Zealand. It will then boil down to the net run rate in such a case.

West Indies Innings: Sri Lanka are in a great position to secure a place in the Semi Finals after restricting the dangerous West Indies batting unit to just 129 for 5 at Pallekele! The Lankan spinners led by Ajantha Mendis completely dominated the West Indian batsmen except for the partnership between Dwayne Bravo and Marlon Samuels.

It was a slow start for the Windies and the opening batsmen – Johnson Charles and Chris Gayle failed to make up for that. When Gayle was caught behind off a slower one from Kulasekara, West Indies were stuck at 16 for 2 in 5.1 overs. Dwayne Bravo joined Samuels at this stage to play some great shots. Bravo scored an attractive 40 (from 34 balls with 4 fours and 2 sixes) before pulling a long hop from Jeevan Mendis into the hands of Dilshan.

Ajantha Mendis sustained the pressure on West Indies by cleaning up Kieron Pollard with a googly to reduce them further to 90 for 4 in 15.5 overs. Marlon Samuels came up with some clean strikes to bring some respectability to the total towards the end. He scored 50 from 35 balls with 4 fours and 2 sixes. Ajantha Mendis produced dream figures of 4-1-12-2.

Toss and Teams: West Indies have won the toss and elected to bat first against hosts Sri Lanka in the Super Eights Match at Pallekele. A win for either side would seal a spot in the Semi Finals from this Group! So both the teams would go hard for a victory. Sri Lanka have made one change with Rangana Herath replacing the injured Akila Dananjaya. West Indies have also made just the one change with Fidel Edwards replacing leggie Samuel Badree.