India yet to find a suitable replacement to Anil Kumble

India’s most successful spinner Anil Kumble retired in 2008 after a marvellous career. However, even four years after his retirement, India are struggling to find a suitable replacement for him. For a while, it seemed that Harbhajan Singh would be the ideal choice to take over as India’s lead spinner.

India’s most successful spinner Anil Kumble retired in 2008 after a marvellous career. However, even four years after his retirement, India are struggling to find a suitable replacement for him. For a while, it seemed that Harbhajan Singh would be the ideal choice to take over as India’s lead spinner. Sadly, since Kumble has quit the scene, Harbhajan himself has faded away. He was tried in only Test in the current series against England before being released for domestic cricket. It would be pretty easy to figure out then as to how below par his effort was in Mumbai. 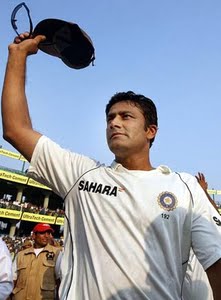 Except for the first Test at Ahmedabad, the other Indian spinners in the squad haven’t managed to cause much trouble to the English batsmen, Alastair Cook in particular. Ravichandran Ashwin has only gotten easier to play with in every innings that has gone by and while the left-arm spinner Pragyan Ojha has performed better, his bowling efforts have very much paled in comparison to Monty Panesar and Graeme Swann. And, from what has been on display at Eden Gardens so far, neither has looked anywhere close to threatening. This is why India’s chances of claiming the series from here onwards are slim.

Since the start of the 90’s, India have had a wonderful run at home mainly because they have had spinners who have exploited the conditions to the hilt. It all began during the series against England in 1993, when Anil Kumble combined with Rajesh Chauhan and Venkatapathy Raju to embarrass the Englishmen 3-0. Kumble has been crucial to India’s success at home right till the time of his retirement. Having him as lead spinner, Mohammad Azharuddin tasted plenty of victories in Indian conditions even as they continued to falter away from home. Most people remember Sachin Tendulkar and Navjot Sidhu’s heroics from the 1998 series against Australia, but the victory wouldn’t have been possible without Kumble’s match-winning efforts.

The next time the Aussies visited India, Kumble was out of the squad due to injury. But, India, accidentally managed to find a miraculous replacement in Harbhajan Singh, who tormented the visiting Australians in 2001. Here again, Singh was quick to admit the crucial inputs Kumble gave him for the series, and even acknowledged the great leg-spinner’s contribution to the Indian team in spite of not being in the Indian XI at that point of time. When Kumble returned from injury, Singh and him formed a formidable combination for a brief period during which India continued to taste success at home. However, things have changed drastically following Kumble’s retirement as the off-spinner from Punjab hasn’t been half as good since Kumble parted ways after hanging up his boots.

The recent series’ against New Zealand and West Indies raised hopes of an Indian spin revival as both Ojha and Ashwin were among the wickets in each and every game. However, England are tougher opponents, and the inexperience of the spin duo is coming to the fore. How Dhoni wished Kumble was around.