The West Indies Selectors have named a 13-man squad for the 3 Digicel ODIs at St Vincent against Australia; Dwayne Bravo and Tino Best comeback into the side.

West Indies have announced a 13-man squad to be led by Darren Sammy for the first three One Day Internationals against Australia. All the three Digicel ODIs are scheduled to be played at the Arnos Vale Ground in Kingstown, St Vincent. While Darren Sammy will lead the West Indies yet again, his deputy is going to be Wicket Keeper Denesh Ramdin.

The hosts will be missing three regular players in Ravi Rampaul who is suffering from dengue and openers Lendl Simmons and Adrian Barath, who are having finger injuries. Chris Gayle remains to kept in wilderness because of his differences with the West Indies Cricket Board. On a positive note, all-rounder Dwayne Bravo makes a comeback after a long lay-off with an ankle injury. 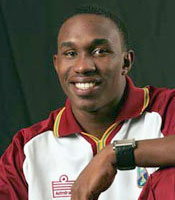 The West Indies have given break to an uncapped player Johnson Charler. The 23-year-old Johnson Charler is from St. Lucia and had played 2 T20Is against England in 2011. There was a surprise recall for fast bowler Tino Best who makes an international comeback after three years at the age of 30. Best who can bowl at good speeds had played 14 Tests and 12 ODIs with limited success.

Commenting on the team that has been announced, the Chairman of Selectors - Mr. Clyde Butts said - “Tino over the last two years has been very consistent with his performance in the shorter format of the game, and Dwayne looks like he has returned to form and has been consistent, plus his on-field experience will be of value to us.”

West Indies have ignored fast bowler Fidel Edwards for the One Dayers as they are keen to preserve him for only Tests and T20Is. Clyde Butts on Edwards’ exclusion said “Fidel is being considered for two formats of the game at this time – Tests and Twenty20s. It is all about workload management as we approach a long and demanding schedule of cricket, so we have to handle him with care, considering the injury problems which he has had in the past.”

The first ODI between West Indies and Australia will be played on the 16th of March.