I don't care: Kohli on being 'targeted' by Aussie media

Indian skipper Virat Kohli says that he is not bothered at all about what is being is being written about him in the Australian media in the wake of the Bengaluru DRS controversy. The Aussie media

Indian skipper Virat Kohli says that he is not bothered at all about what is being is being written about him in the Australian media in the wake of the Bengaluru DRS controversy. The Aussie media has been extremely vocal in criticising the Indian captain and his antics during and after the Bengaluru Test.

"Whether it's criticism or praise, it's all happened all in the past as well. Honestly these things don't affect me. It does not matter who writes what about me. They are doing their job, I'm doing mine. 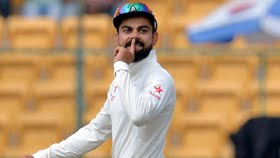 "No one plays 15-16 years of international cricket without being criticised. Everyone's making most of their jobs and my job is to play on the field," he went on to say.

"I could be talking about another again and things are not just going to move forward. Everyone here has their own interests. Our focus remains on the game and we need to look forward," he stressed.

Asked about Cheteshwar Pujara and Ajinkya Rahane's match-turning century-plus partnership at Bengaluru, a pleased Indian captain responded, "Thank you for asking about cricket. Individually I think it's adjustments that guys make in their techniques. I saw Pujara opening up his stance, I think it was apt to give himself more space.

"Ajinkya trying to play inside the line of the ball not trying to play through the covers. KL (Rahul) has been batting really well. But those two guys really stepped up and found their ways. That was the difference.

"Such minor things can make massive differences. We certainly saw that as those two guys are finding ways to get runs on the wicket," Kohli explained.