The three-day match between New Zealand and Mumbai at the Feroz Shah Kotla in Delhi ended in a draw after Mumbai bowled out the visiting New Zealand side for 235, and Mumbai decided against taking up the chase of 96 in 9 overs.

The three-day match between New Zealand and Mumbai at the Feroz Shah Kotla in Delhi ended in a draw after Mumbai bowled out the visiting New Zealand side for 235, and Mumbai decided against taking up the chase of 96 in 9 overs. Luke Ronchi was the star of the day for the Kiwis making a rather fluent 107 from 112 balls with 15 fours and 3 sixes. BJ Watling was the other significant performer of the day, with 43. The others struggled against the Mumbai spinners as the pitch offered decent turn on what was the final day of play.

New Zealand sprung a surprise in their second innings, sending in Ronchi to open along with regular opener Martin Guptill. The end result ended up being a case of chalk and cheese. While Ronchi took on the spinners, and used the lofted shot to great effect, Guptill failed for the second time in the match, and was dismissed for a duck. He was taken out by left-arm spinner Vishal Dabholkar, who opened the bowling. Guptill tried to play an inside out drive unconvincingly, and only managed to give a catch to slip. With Ronchi's success at the top, and lack of runs from Guptill, it would be interesting to see if New Zealand adopt the ploy for the first Test as well.

While Ronchi had a memorable day, the rest of the batting, barring Watling, did not come up with a convincing effort. Henry Nicholls, who has been impressive in his short Test career so far, looked out of sorts. He managed just one before being sent back. Mitchell Santner sent in above in the batting order made 8 while Doug Bracewell managed 17. The other regular opener, Tom Latham, batted in the lower order, and made 25 before retiring hurt. The tail inclusive of Trent Boult, Neil Wagner and Ish Sodhi were easy target for Mumbai bowlers. For Mumbai, Parikshit Valsangkar finished with an impressive tally of three wickets while Siddhesh Lad, who earlier hit a hundred, and Vijay Gohil, picked up two each.

New Zealand will have mixed emotions following the conclusion of the practice match. Ronchi's second innings hundred was a big plus. In the first innings, Tom Latham, and Kane Williamson hit fifties while Ross Taylor also got good batting practice with 41. But, the lack of runs from Guptill will surely worry them for he has been struggling for a while in Tests. New Zealand will also be thinking about Nicholls, who did not have a great game, and is inexperienced as well, especially under the conditions. 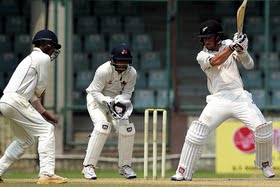 In the bowling, New Zealand have been dealt a big blow with their lead pacer Tim Southee being ruled out. In such a scenario, Trent Boult will have to shoulder additional responsibility. He was decent with 1 for 35 from 12 overs. Neil Wagner, on the other hand, went wicketless, so did Bracewell. As for spinners, they have troubled India in recent times. In fact, the Kiwi spinners embarrassed India in the World T20 clash. But, as Ish Sodhi, Mitchell Santner and Mark Craig found out in the practice match, things could be rather different.