Mohammad Ashraful needs to make up for lost time

Considering how long he has been playing international cricket it is difficult to believe that Bangladeshi batsman Mohammad Ashraful is only 28. Making his test debut as a precocious boy of 17 in 2001, he defied the wiles of the marauding Muttiah Muralitharan and took Sri Lanka for a fearless 114.

Considering how long he has been playing international cricket it is difficult to believe that Bangladeshi batsman Mohammad Ashraful is only 28. Making his test debut as a precocious boy of 17 in 2001, he defied the wiles of the marauding Muttiah Muralitharan and took Sri Lanka for a fearless 114. And perhaps it was the naive unaffectedness of youth, but when asked afterwards if he had any difficulty negotiating Muralitharan, who snared ten wickets in the game, Ashraful indicated that the champion off-spinner had perturbed him little.

One drawback with starting off at such lofty heights is that it engenders high expectations; and since consistently performing in such a manner is near impossible, disappointment is bound to come at some point. In Ashraful’s case disappointment came and soon led to frustration as the diminutive batsman often failed to approach the standards he had set in his first test. 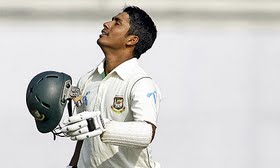 Only rarely did Ashraful again walk with kings. His hundred in an ODI against Australia during a triangular tournament in England in 2005 piloted his team to what was called the biggest ODI upset ever, and reminded fans of his capabilities. As quick on the pull shot as Ponting and as nimble on his feet to the spinners as Lara, his shot-making pedigree was never in doubt. It was his discretion in employing his wide range that was seen as his downfall.

The little man plays many an innings that starts with him blooming like a fresh spring flower, with strokes all round the park, only to be cut down prematurely, perishing to some ill-advised attempt at a stirring shot. And while that happens to every batsman, especially one as forthright as the Ashraful, it is too much a part of his story for him to be comfortable with it.

For someone as talented as he to have amassed only five test (Galle century not included) and three ODI centuries in his career, now running almost a dozen years, is a travesty.His average of 22.6 in 57 tests and 22.49 in 171 ODIs is inadequate for a man of his gifts. Instead of being a mainstay in his country’s side Ashraful’s infrequent success has seen him in and out of a line-up in which he should have easily held down a permanent spot. His has been a career that would satisfy neither the Bangladeshi cricket fans nor Ashraful himself.

But a recently in Galle, during the first test against Sri Lanka, Ashraful played a mammoth innings of 190 that revived some of the early optimism in the hearts of many of his fans. It was an innings unlike most he had played before. All of the mesmerizing strokes were present, but so too were the focus, patience and discretion that his batting often lacked.

In his first test in over a year, Ashraful added 267 with his captain, Mushfiqur Rahim, who became the first Bangladeshi batsman to score a double century, and guided Bangladesh to a mammoth 638. Yes, the surface was benign, and seven other batsmen collected hundreds; and no, one good innings does not a career turnaround make, but getting a hundred is never an easy feat, and how many times have we seen him squander such opportunities?

His innings was the longest ever played in his country’s colours. Cricket fans that abhor seeing exquisite talent wasted will grab this last effort and take it as an indication that Ashraful might have finally matured and is now ready to assume his rightful place among the game’s batting elite. He did nothing of note in the following test, but he was run-out in the first innings and lost his wicket to an exceptional delivery in the second.

Still, before we get carried away let us dwell, for a bit, on how his marathon knock ended. After going to sleep on 189 and with a historical double century beckoning, Ashraful attempted a reverse sweep off the next morning’s very first delivery from Tillakaratne Dilshan. The confident appeal for a catch to leg slip was rebuffed by the umpire.

But instead of being properly grateful for the close call that should have refocused his mind and tempered his belligerence, Ashraful wildly rushed down the track a few minutes later to Rangana Herath and was caught at slip off an attempt at a shot over cover. It was no way to end such a judicious innings. Hopefully, that kind of decision-making will now become the aberration rather than the norm.