Rohit Sharma played a sizzling captain’s knock in the second T20I as India fought back to square the three-match series 1-1. Playing in his 100th T20I match,

Rohit Sharma played a sizzling captain’s knock in the second T20I as India fought back to square the three-match series 1-1. Playing in his 100th T20I match, Rohit blazed his way to 85 from 43 balls as India chased down 154 with ease, and won the Rajkot T20 by eight wickets. Rohit blasted six fours and as many sixes in his knock as Bangladesh bowlers were taken to task.

Responding to the innings, former India batsman Virender Sehwag, to whom Rohit is often compared, went to the extent of saying that Rohit can do some things which perhaps even Indian skipper Virat Kohli can’t.

"When Tendulkar played, he used to ask 'even you can do what I do'. But he wouldn't understand what he can do, others can't. Rohit Sharma is that of a player. What Rohit Sharma can do, maybe even Virat Kohli can't. In one over, hitting 3-4 sixes, scoring 80-90 runs off 45 balls -- have not seen Kohli do it many times," Sehwag was quoted as saying in a video that was posted on Cricbuzz's official Twitter handle. 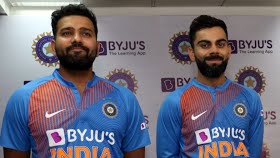 It was following the template of Sehwag’s success as a Test opener that Rohit was promoted to open the innings in the series against South Africa. And, the Mumbai Indians skipper responded in sensational fashion, with two hundred and a double hundred.

Rohit tasted a rare failure in the first T20I at Delhi, as Bangladesh registered their maiden win in the format against India. However, with his team under pressure, Rohit delivered with a fantastic knock at Rajkot.

Before Rohit’s splendid innings, spinners Yuzvendra Chahal (2/28) and Washington Sundar (1/25) put the brakes on Bangladesh’s innings as they were restricted to 153 for 6. This was after the opener Liton Das and Mohammad Naim got the team off to a brisk start, adding 60 for the opening wicket.

In reply, Rohit featured in a 118-run opening stand with Shikhar Dhawan (31). After the openers fell, Shreyas Iyer (24 not out from 13) did the finishing job.

The final and deciding T20I will be played at the Vidarbha Cricket Association Stadium in Nagpur on Sunday.