Having overcome arch-rivals Pakistan yet again in a World Cup face-off, a buoyant India will take on a depleted Bangladesh at the Chinnaswamy Stadium in Bangalore on Wednesday

Having overcome arch-rivals Pakistan yet again in a World Cup face-off, a buoyant India will take on a depleted Bangladesh at the Chinnaswamy Stadium in Bangalore on Wednesday. Having been shocked by New Zealand in their tournament opener on a spinning surface, India got the better of Pakistan on yet another rank turner at Eden Gardens, this time getting their tactics right. The spinners utilised the conditions effectively before Virat Kohli, yet again, proved match winner. Bangladesh's chances of progressing have depleted following the two losses to Pakistan and Australia. But, they can still cause an upset.

It would be interesting to see what kind of tactics MS Dhoni adopts for the match against Bangladesh. India have a well settled bowling line up, but looking at the spinning surfaces that have been on offer for the hosts, they might be pondering upon whether the services of veteran off-spinner Harbhajan Singh would be required. Then again, India have a settled bowling line-up with the likes of Jasprit Bumrah and Ashish Nehra doing exceedingly well. In the spin department, the hosts already have Ravichandran Ashwin and Ravindra Jadeja doing a great job along with Suresh Raina and Yuvraj Singh for support. 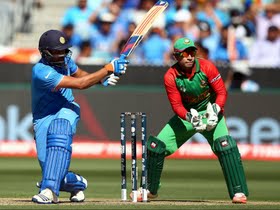 While India did manage to overcome Pakistan, their batting has been heavily dependent on one man Kohli. Thus, if Bangladesh can see the back of him early, they would be hopeful of restricting India. After all, the trio of Shikhar Dhawan, Rohit Sharma and Suresh Raina have failed to produce anything substantial, and have actually looked very uncomfortable out in the middle, even in home conditions. This is where having Ajinkya Rahane, who is the reserve batsman in the squad, could come in handy. Thankfully for India, Yuvraj has struck from in recent times while Dhoni has also looked dangerous.

Bangladesh have plenty of headaches as they head into the match against India. The banning of Taskin Ahmed and Arafat Sunny, midway through the tournament, has thrown their campaign completely out of gear. Their replacements, Saqlain Sajib and Shuvagata Hom, looked nervous to make any kind of impression against Australia. At the same time, Bangladesh will be pleased with the return to form of pacer Mustafizur Rahman, who came back from injury and immediately made an impact, claiming a couple of wickets against Australia, while being economical. With no Ahmed, Bangladesh would hope for good performances from Al-Amin Hossain and Mashrafe Mortaza.

To do well against India, Bangladesh will want their experienced players to stand up and deliver. Thankfully for them, both the all-rounders Shakib Al Hasan and Mahmudullah have been in impressive form with both the bat and the ball. Mahmudullah, in particular, played an excellent knock against Australia in a losing cause. Also, if Tamim Iqbal is fit, it will add to Bangladesh’s overall prowess as team. He can certainly make a big difference to the team’s fortunes. On current form, India would definitely start as favourites, but Bangladesh cannot be taken lightly at all.