India overcame a positive opening start from the Aussies in their second innings to reduce the tourists to 74 for 2 in 34 overs by the close of play on Day 3.

India overcame a positive opening start from the Aussies in their second innings to reduce the tourists to 74 for 2 in 34 overs by the close of play on Day 3. R Ashwin took the two wickets to fall in the final session by having both David Warner and Phil Hughes bowled round their legs in attempted sweep shots. The Aussies trail behind by 192 runs with 8 wickets in hand and are staring at a possible fourth day defeat unless one of their batsmen comes up with a special knock on a track that has uneven bounce and turning square.

At Stumps, Australia have Ed Cowan batting on 26* (from 100 balls with 4 fours) along with Shane Watson who is on 9* (from 27 balls with a six). India could have got early wickets but a couple of tough chances went down off Bhuvneshwar Kumar – a flashy cut shot from Warner dropped by Kohli at gully and an inside edge from Cowan dropped to his right by MS Dhoni. The Aussie openers went onto put 56 runs before Ashwin broke through.

Update at Tea: India have been bowled out for 503 in the afternoon session with the ball turning and jumping from the cracks. Debutant Maxwell helped himself with four wickets and Doherty chipped in with three wickets as India collapsed post lunch from 460 for 4 to 503 all out. However, India are a long way ahead in this Test match with a massive first innings lead of 266 runs on what is a turning pitch. 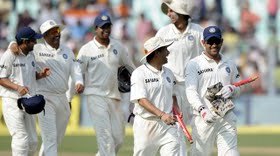 There was a controversy of sorts immediately after lunch when Sachin Tendulkar was given caught down the legside off Pattinson. At real time, it looked as if Tendulkar had missed his shot but a persistent appeal though saw Umpire Marais Erasmus take his time and then go upstairs seeking some information from the TV Umpire. Replays showed that a clean catch was taken by the keeper and there was an inside edge from Sachin (7) who was declared out. The question is when there is no DRS in the series, how could the Umpire overturn his decision by seeking the TV Umpire’s assistance.

The Hyderabadi crowd were disappointed after Sachin’s exit but were soon entertained by a breezy cameo of 44 from 43 balls by Skipper MS Dhoni who struck 8 fours before he hit Maxwell into the hands of mid off. Wickets fell down in a heap after Dhoni’s departure in no time. Ravindra Jadeja was caught and bowled by Maxwell who dived full length to take a catch in the second attempt. Ashwin was forced to edge a square turning and bouncing delivery from Doherty to gully while Harbhajan holed out to mid off the same bowler.

Virat Kohli (34 from 92 balls) who was patiently batting got out next when he stepped out for a flick but could only inside edge a jumping off break from Maxwell to the diving Cowan at leg slip. The last wicket to fall was Bhuvneshwar Kumar who came down the track and was stumped after getting beaten by a turning and bouncing delivery from Doherty.

Update at Lunch: Cheteshwar Pujara registered his 2nd double century of his Test career while Murali Vijay was unlucky not to get that magic figure on the third day morning of the 2nd Test at Hyderabad. Both the overnight centurion were dismissed but not before piling up a massive 370-run partnership for the 2nd wicket. India went to Lunch on 400 for 3 in 120 overs with the lead stretched to 163 runs.

Vijay was the first to go this morning, caught at leg slip when he was forced to get an inside edge on the backfoot to a jumping off break from Maxwell. Vijay finished with a career best of 167 from 361 balls with 23 fours and 2 sixes. Pujara departed soon after his double century when he played a weak hook shot off a Pattinson bouncer into the hands of square fine leg. Pujara’s 204 came in 341 balls with 30 fours and a six. At Lunch, India have Tendulkar on 3* along with Kohli who is on 4*. The hosts collected 89 runs in 30 overs this morning.

Build Up to Day 3: India well placed at 311 for 1 will be looking to bat another full day to set up this Second Test towards an innings victory. The overnight batsmen Vijay and Pujara will hope to continue from where they have left to try and score double centuries. The struggling Australians will have to bowl really well to bowl out India today. However, the writing is on the wall as the Aussies had lost this Test already because of a poor batting display on Day 1.