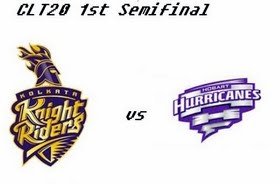 Preview : It is almost as if the opposition has only 16 overs to chase a target in a T20 if Sunil Narine is in the opposition. Lasith Malinga and Chris Gayle are T20 superstars, but Narine is expected to, and nearly always makes, a huge impact on every single match he plays in the format. Eleven wickets in four games at an economy rate of 5.12 is pure gold in T20. His quicker deliveries may have been reported for a suspect action and it will be interesting to see how he adapts, but he will still be the biggest threat for Hurricanes.Hurricanes will need someone to hold the innings together and push on in case it threatens to fall apart in the face of the spin onslaught. They have the man for that task in Shoaib Malik. The former Pakistan captain is much better suited to these conditions than the Australians are, and while he has not really blazed away, he has had a fine tournament. He is Hurricanes' second-highest run-getter after Aiden Blizzard and has a strike-rate of 135.89.

There is only one way the first Champions League T20 semi-final will be decided. Hobart Hurricanes, the only non-IPL franchise in the semi-finals, will be facing probably the toughest T20 attack in these conditions. The Kolkata Knight Riders spin army has spared no side this tournament. Perth Scorchers and Dolphins, their two non-subcontinental opponents, were restricted to 151, one batting first and the other batting second. Lahore Lions from Pakistan were also not allowed to go beyond 151. Even the powerful Chennai Super Kings batting line-up managed only 157.Sunil Narine. Kuldeep Yadav. Piyush Chawla. Yusuf Pathan. Mystery, chinaman, legspin, offspin. Had Shakib Al Hasan been available, they would have had left-arm orthodox covered too. They just keep coming at you one after the other. The four have collectively picked up 23 wickets in four matches, which is almost six wickets every game. Add to that a collective economy-rate of 6.20, and you have lost the bulk of your line-up with very few runs on the board.Scorchers coach Justin Langer has compared facing spin in India to eating chilli to make his point about how daunting and unfamiliar a challenge Australian batsmen face in these conditions. Hurricanes have posted big wins over Cape Cobras, Northern Knights and Barbados Tridents, but none of those attacks posed the threat that 16 overs of spin will.The semi-finals are in Hyderabad, where the Knight Riders have been based from the start of the tournament. There is the obvious advantage of having played all their group matches on the same ground. Further, Narine has said that the size of the outfield, which is comfortably larger than at most Indian grounds, has helped him. Batsmen will be more hesitant to take on the boundary-riders, and will find it harder to get away with mishits if they do.What will give Hurricanes hope is Knight Riders' batting form this tournament. They have struggled all three times chasing, which is their preferred mode, 11 of their 13 successive wins coming batting second. They managed to stutter against Lions even after a century opening partnership. The game not being over till the last ball is bowled is not a cliché when it comes to Knight Riders. It is an opportunity for the opposition.

"Nothing has been said over the last three years since he has been with KKR. So, it's a bit of a surprise but Sunil is a character. He is confident that it might be a problem in technique, something he can go on and work on."

Match Stats : Knight Riders' spinners and Hurricanes' quicks have taken the same number of wickets in the tournament - 23

At 5.80 runs an over, Hurricanes have had the slowest average opening partnership in the tournament