It took just a little over two hours for India to wipe out West Indies on Day 3 to wrap up an innings victory in the Mumbai Test. Sachin Tendulkar’s last day in International Cricket came to a quick end with the West Indians surrendering their remaining 7 wickets in a hurry.

It took just a little over two hours for India to wipe out West Indies on Day 3 to wrap up an innings victory in the Mumbai Test. Sachin Tendulkar’s last day in International Cricket came to a quick end with the West Indians surrendering their remaining 7 wickets in a hurry. There was only a semblance of a fightback coming from Shivnarine Chanderpaul and Denesh Ramdin which only helped the tourists to better their first innings total of 182 by five runs. India cleanswept the series 2-0 with an innings and 126 runs victory.

Pragyan Ojha captured a maiden 10-wicket haul playing his 24th Test match and R Ashwin at the other end bowled well to take four wickets. The morning session started to go in West Indies’ favour as the two spinners struggled to get hold of their line and lengths. Chris Gayle and Marlon Samuels started to take toll of them but the 4th wicket stand flattered to deceive. Samuels, in a rush of blood, charged down the track too early, and was stranded out of the crease by a turning and bouncing delivery from Ojha which had him stumped by miles. Samuels lasted only 18 balls scoring 11.

Chris Gayle followed Samuels back to the pavilion, four overs later, when he edged a square cut to Dhoni, trying to hit an arm ball too hard off Ojha. Gayle finished the series with a disappointing score of 35 (from 53 balls). A couple of overs later, Ojha had his third wicket of the morning when left-handed Narsingh Deonarine in an expansive cover drive got a leading edge back to the bowler. 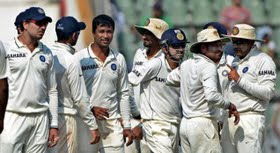 At 89 for 6 in just 23.4 overs, West Indies were going down rapidly well before lunch. But the pair of Chanderpaul and Ramdin defied the Indians threatening to take the match into the afternoon session. However, R Ashwin at the right moment came up with a drifter from round the sticks to fox Chanderpaul (41 from 62 balls with 4 fours) for an lbw.

India’s hopes of wrapping up things before lunch were alive again more so with the possibility of the session being extended. Skipper Darren Sammy lasted only 8 balls before he was trapped lbw by an arm ball from Ojha. Shillingford was lbw too, but to Ashwin after missing a sweep to a full ball. Last man Shannon Gabriel had his off stump cleaned up by a speedy inswinger from Mohammed Shami. Denesh Ramdin was the lone man surviving for the West Indies with 53* (from 68 balls with 8 fours and a six).

Pragyan Ojha took 5 for 49 and Ashwin took 4 for 89 as West Indies collapsed to 187 in just 47 overs. Ojha got the Man of the Match award. Rohit Sharma bagged the Man of the Series award for his two hundreds.