Wednesday was a sad day in Indian history as the first superstar of Indian cinema Rajesh Khanna alias Kaka passed away. Khanna was a phenomenon in Bollywood, giving a record 15 hits in a row at his peak, from 1969 to 1972.

Wednesday was a sad day in Indian history as the first superstar of Indian cinema Rajesh Khanna alias Kaka passed away. Khanna was a phenomenon in Bollywood, giving a record 15 hits in a row at his peak, from 1969 to 1972. However, once his golden period was over, he just faded into oblivion. A combination of arrogance, overconfidence and bad choice of films played a major part in Khanna’s decline. With the passing away of Kaka, an era has indeed ended in Indian history. This makes it a poignant moment to look at the Rajesh Khanna of Indian cricket. 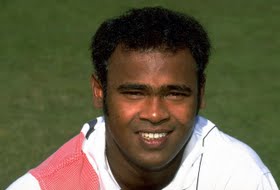 After plenty of contemplation, one settled on a player named Vinod Ganpat Kambli. The man from Mumbai burst on to the scene like a sensation few others have till date. His first two hundreds in Tests were double hundreds, and he added a couple in the ODI version as well. Just like Khanna, his flamboyance wooed every one, and in no time he was the heartthrob of the nation. It helped that he lived up to his reputation early on. Just like Amitabh Bachchan lived in the shadow of the senior actor in the initial years, so too did the southpaw outdo his school chum Sachin Tendulkar in the first couple of seasons. However, neither Khanna nor Kambli had any idea of the unimaginable fall from grace that was in store for them. Bit by bit, their stardom crumbled.

Akin to the Bollywood’s first superstar, Kambli also could not handle the fame that came with success. In the home series against West Indies in 1994-95, Kambli struggled to score with any kind of comfort. The fast bowlers kept bowling short to him, and the left-hander had not answer to it. This was the series where Kambli’s fortune took a turn for the worse, and the failure in the 1996 World Cup was the last straw in the back for him. It is believed that neither Khanna nor Kambli tried to improvise once they found their careers at the crossroads. While Kambli was criticised for lack of dedication, Khanna continued with his flamboyant ways unabated even after beginning to lose his command at the box office and his fans.

The result of the failures of both Kambli and Khanna to improvise was pretty much the same, and on expected lines. Kambli never played a Test after 1995, and faltered despite making countless comebacks to the one-day squad. As for the actor who once reigned supreme, he went through a period in the 80’s during which he only managed to deliver a couple of hits in almost an entire decade. Kambli tried to reinvent himself as an actor, but unlike cricket, wasn’t talented enough to achieve anything substantial.

The careers of Khanna and Kambli are prime examples of how a great start cannot guarantee a successful career. What is needed is dedication and unwavering commitment, something which Tendulkar and Amitabh had, and the two Ks probably didn’t.