South Africa put behind their disappointment of the previous game, and fought back with resilience to clinch the deciding ODI at Durban by 62 runs, thus taking the series 2-1. Batting first,

South Africa put behind their disappointment of the previous game, and fought back with resilience to clinch the deciding ODI at Durban by 62 runs, thus taking the series 2-1. Batting first, the hosts put up an impressive 283 for 7 courtesy half-centuries from AB de Villiers and Morne van Wyk, both of whom returned to much needed form. Later in the innings, Farhaan Behardien came in and played a breezy cameo to help South Africa finish on a high. In response, New Zealand were never in the hunt. Tom Latham was the only one chipped in with a fifty as the Kiwis were all out for 221.

South Africa got off to a confident start batting first, which aided them in setting up an impressive total. Hashim Amla and Morne van Wyk batted steadily to add 89 in just over 20 overs before they were separated. The Kiwi bowlers, Adam Milne and Been Wheeler, did well to keep things tight early on. But, to the credit of South Africa's openers, they stuck around. This was a crucial innings for van Wyk, as he was battling to save his career. The slow 58 from 100 balls was thus understandable from the otherwise aggressive batsman. Amla, who had made a sedate 44, was the first to fall, caught and bowled by Grant Elliott. 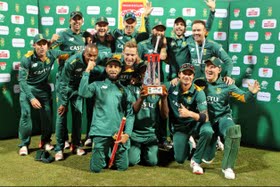 Once the foundation was set de Villiers took over. He may have looked out of sorts in the earlier games, but in the do-or-die encounter, he stood up. He swatted Ish Sodhi over midwicket to put the bowler off his line, and blasted three fours off a Milne over to keep South Africa in good shape. In his company, even David Miller began to discover some form, although he continued to look rusty. The pair added 86, with de Villiers also becoming the fastest international batsman to complete 8000 runs, breaking Sourav Ganguly's record. De Villiers was looking set for a big one when a Doug Bracewell slower one got him.

With de Villiers gone, South Africa were hoping Miller would take over. But, in his skipper's absence, the big hitter did not last long. Miller was back in the hut for 36, giving an easy catch to Luke Ronchi. The Proteas would have been worried of losing their momentum, but Behardein ensured nothing of that sort transpired. He hit a quick 40 off 28 balls, with six fours and a six as the hosts finished with a flourish. South Africa scored 44 in their last six overs. For New Zealand, Elliott was most effective with 2 for 41, Wheeler claimed three, but was taken for 71.

In response, the Kiwis needed Martin Guptill to fire. But, that wasn't to be the case. Dale Steyn got the opener to drive one early on, and found his edge. Latham and Kane Williamson kept the hopes alive for the visitors with a fighting second wicket stand. But, it did not last long enough. Williamson was cleaned up by Imran Tahir for 39, just after the batting side had crossed 100. Latham was run out by Miller immediately after crossing his fifty. Kiwis' World Cup hero Elliott and Colin Munro came up with cameos, but Tahir and co had applied the squeeze by then.