In the build up to the sixth season of the Indian Premier League (IPL), we look back at one incredible performance from each of the earlier seasons.

In the build up to the sixth season of the Indian Premier League (IPL), we look back at one incredible performance from each of the earlier seasons.

Brendon McCullum: 158 not out 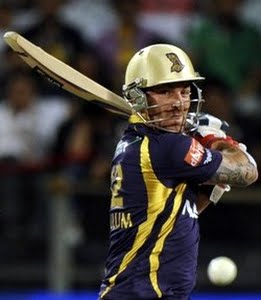 This was the very first match in the IPL, and McCullum’s brilliance made it an unforgettable one. Opening the innings for Kolkata Knight Riders, he blasted 158 not out in 73 balls. It was a rare instance of an innings featuring more sixes than fours. For the record, the Kiwi skipper slammed 13 sixes and 10 fours in the match, maintaining an incredible strike rate of 216. Kolkata amassed 222 for 3 in their 20 overs. Their opponents, Royal Challengers Bangalore, were bundled out for 82, Ajit Agarkar picking up 3 for 25.

The youngster played a wonderful knock for Royal Challengers Bangalore against Deccan Chargers in the 2009 edition. Opening the innings in the game at Centurion, Pandey caressed 10 fours and 4 sixes during his 73 ball knock. The impressive innings was built at a strike rate of 156. Pandey’s brilliance took Bangalore to 170. Deccan put up a spirited reply courtesy Herschelle Gibbs’ half-century, but fell short by 12 runs.

This was undoubtedly the most spectacular batting performance of the 2010 season. Opening the batting for Chennai Super Kings against Rajasthan Royals at Chepauk, Vijay blasted 127 in 56 balls with the help of eight fours and as many as 11 sixes, at a strike rate of nearly 227. Courtesy, Vijay’s brilliance, Chennai notched up 246 for 5. Rajasthan replied with great gusto -- Naman Ojha making an unbeaten 94 and Shane Watson contributing a fighting 60. But, Rajasthan fell way shot of the target in the end, making 223 in their allotted 20 overs.

The tall West Indian was in an unstoppable mood during the 2011 edition. Playing for Bangalore against Kings XI Punjab at the Chinnaswamy Stadium, Gayle smashed 107 in as few as 49 balls. The knock was incredible in every aspect. It featured 10 fours and nine sixes, at a strike rate of 218. Thanks to Gayle’s sensational knock, Bangalore made 205 in their 20 overs. Gayle then shone with the ball as well. He picked up 3 for 21 in his four overs, as Punjab were rolled over for 120, Bangalore winning by 85 runs.

The story of the 2012 edition was pretty much about most opposition batsmen struggling against the mystery spin of KKR’s Sunil Narine. Against Kings XI Punjab at the Eden Gardens, he came up with a magnificent spell, almost single-handedly undoing the opponents. Narine’s scalps in the game included big names like Adam Gilchrist and Shaun Marsh before he cleaned up the tail in a heap. His 5 for 19 restricted Punjab to 134 for 9. It was a score KKR should have easily chased down. Instead, they collapsed to 132 for 7, with Piyush Chawla grabbing three wickets, as Narine’s magical spell vent in vain.