A brilliant partnership between Suresh Raina and Irfan Pathan helped India pull off a thrilling victory in the third ODI at the R Premadasa Stadium in Colombo.

A brilliant partnership between Suresh Raina and Irfan Pathan helped India pull off a thrilling victory in the third ODI at the R Premadasa Stadium in Colombo. India's hopes had perished almost when centurion Gautam Gambhir got out leaving India 91 more runs to win from 69 balls with just five wickets in hand. Suresh Raina (65* from 45 balls with 6 fours and a six), the only specialist batsman left for India came up with a stunning fightback with all-rounder Irfan Pathan (34* from 31 balls with 3 fours) to clinch the run chase of 287 with two balls to spare. A new record was created following India's lovely chase with Sri Lanka losing an ODI for the first time ever having posted a 250 plus total batting first at home.

India’s run chase was off to a poor start with Virender Sehwag (3) slapping Thisara Perera into the hands of short covers in the 2nd over. Gautam Gambhir and Virat Kohli then steadied the ship for the visitors with a solid 95-run partnership. Virat Kohli, who was slow with a 65-ball 38 was caught and bowled when he tried to play a forcing drive off Rangana Herath in the 21st over. Skipper MS Dhoni promoted himself at no.4 and like Kohli put up a steady partnership with Gambhir of 67 runs to provide the launching pad.

Gautam Gambhir right from the beginning was playing beautifully and maintaining a wonderful strike rate. Dhoni (31 from 49 balls with a four) was slow and before he could make amends got clean bowled by an inswinging yorker from Lasith Malinga in the 36th over. In the very next ball, a struggling Rohit Sharma was lbw for a duck to a searing yorker from Malinga which reduced India to 180 for 4. Gautam Gambhir (102 from 101 balls with 10 fours) having got past his 11th ODI century got run out by a direct throw from Isuru Udana when he tried to steal a single from mid on. 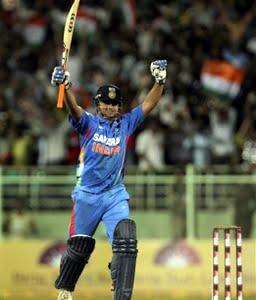 India was without any doubt slipping towards defeat at 196 for 5 in 38.3 overs with the hopes wresting on Suresh Raina and Irfan Pathan to come up with something spectacular. The luck was with India as both the batsmen got away with inside edges and outside edges that would run away for boundaries. Malinga, who was looking hot kept on providing width in his yorkers which let Raina and Pathan off the hook. Within no time, Raina with some clean hits along with the able support from Pathan got India within striking distance of the victory despite the equation at one stage being tough. The pair needed just six more runs to get from the final over which they got with a couple of balls to spare. Suresh Raina got the Man of the Match for his heroic 65* from just 45 balls.

For the Lankans, Rangana Herath bowled tightly for his 9-0-36-1. Dilshan and Jeevan Mendis bowled 7 overs to give away just 23 runs. Sri Lanka couldn’t sustain the heat when it came to the final five overs.

Sri Lanka piled up a formidable total of 286 for 5 on a good batting surface at RPS, Colombo. This was despite the hosts suffering early setbacks losing three wickets for just 20 runs in less than 6 overs. Kumar Sangakkara, Mahela Jayawardene and Angelo Mathews repaired the situation with crucial half centuries.

India had a great start with Tillakaratne Dilshan (4) getting bowled in the 3rd over when his forward defence off Zaheer Khan had rolled back onto the stumps. Zaheer struck again in the 5th over when Upul Tharanga (8) edged a square cut to the keeper. Zaheer’s partner Irfan Pathan complemented him with the wicket of Dinesh Chandimal (0), who was plumb infront to a late inswinger in the 6th over.

Sri Lanka was on the backfoot at 20 for 3 but recovered comfortably through the experienced pair of Kumar Sangakkara and Mahela Jayawardene. The two rescued Sri Lanka to 141 in the 30th over before Mahela Jayawardene (65 from 79 balls with 5 fours) got out lbw to a skiddy delivery from Rahul Sharma. Sangakkara added 41 more runs for his team along with next man Angelo Mathews before he perished in the 38th over. Sangakakara (73 from 95 balls with 5 fours) got caught at point trying to scoop a full and wide delivery from Ashok Dinda.

The homeside was under slight pressure at 182 for 5 in 38 overs. A couple of more wickets would have been great for India but instead they came under the hammer from the pair of Angelo Mathews and the left-handed Jeevan Mendis. Pathan and Dinda who bowled the bulk of overs in the final stages of the innings were taken to the cleaners by both the batsmen. Sri Lanka finished on a high at 286 for 5 thanks to the superb 104-run stand for the unbroken 6th wicket in just 72 balls. Mathews who was caught behind off Pathan but survived because of a noball went onto smash 71* from 57 balls with 5 fours and a six. Jeevan Mendis supported him brilliantly with 45* from 40 balls with 3 fours and a six.

Zaheer Khan was the most outstanding of the bowlers with figures of 2 for 39 in 10 overs. Ashwin and Rahul Sharma bowled on par but couldn’t make inroads in the middle overs. Dinda in his comeback was taken for 76 in 10 overs! The Indian fielders were left disgusted twice in the Sri Lankan innings because of a couple of dogs invading the ground and excreting right infront of live cameras and thousands of spectators!

Toss and Teams: Sri Lanka have won the toss and elected to bat first in the 3rd ODI at the R Premadasa Stadium in Colombo. The pitch at this venue promises to be good for batting. The surface is likely to improve even more under the lights.

The hosts have made one change by replacing Lahiru Thirimanne with leg-spinning all-rounder Jeevan Mendis. India have made two changes with Rahul Sharma and Ashok Dinda coming in for Pragyan Ojha and Umesh Yadav.