Harried after four losses in a row, Bangalore will be desperate to get on the points table when they take on a much-better placed Kolkata

Harried after four losses in a row, Bangalore will be desperate to get on the points table when they take on a much-better placed Kolkata in match 17 of the Indian T20 Cricket at Bengaluru. Another loss and they might start losing belief.

What's shocking about Bangalore plight is the fact that they find themselves in such a position despite having two of the very best batsmen in the world. Both Virat Kohli and AB de Villiers fell to guile of Shreyas Gopal in the previous game. Even their fielding was atrocious against Rajasthan , which proves how disintegrated their are at the moment. 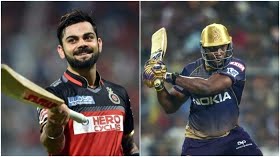 Among the others, Parthiv Patel got a fifty in the last game. However, their bowling has been very much below par. In the game against Hyderabad they were totally decimated as David Warner and Jonny Bairstow smashed belligerent hundreds. Apart from Yuzvendra Chahal, they need others to stand up as well.

Kolkata may have suffered a shock upset to Delhi in the Super Over but that shouldn't impact that their psyche much. Except for the Super Over failure against Lasith Malinga, Andre Russell has been on a different planet altogether when it comes to big hitting.

Russell has got good support from the likes of Nitish Rana, Robin Uthappa and captain Dinesh Karthik. As for their bowling, they would again hope for good efforts from Kuldeep Yadav, Sunil Narine and Piyush Chawla, their three main spinners.