Natarajan should have been Man of the Match: Hardik Pandya after match-winning knock in 2nd T20I

India clinched the T20I series against Australia with a methodical six-wicket triumph at Sydney on Sunday. Set to chase 195 for victory, India got home courtesy a splendid cameo of 42 not out from 22 balls by Hardik Pandya. With 14 needed to win off the last over, Pandya dispatched debutant Daniel Sams over the ropes twice to seal an impressive win for India. Apart from Pandya, opener Shikhar Dhawan (52 from 36), skipper Virat Kohli (40 from 24) and KL Rahul (30 from 22) also made significant contributions. While Shreyas Iyer only made 12 from five, his two boundaries were also crucial as it came at a pivotal point in the chase.

After winning the toss and sending Australia into bat, Indian bowlers struggled to contain the Aussie batsmen. Stand-in skipper Matthew Wade made a belligerent 58 from 32 ball. He slammed 10 fours and a six during his knock before a crazy moment led to his run out. Wade should ideally have been caught by Kohli in the cover. However, the Indian captain spilled the easy chance. Then, looking for a single, Wade was stranded down the middle, with Steve Smith not responding to his call. Smith went on to contribute 46 from 38. Swift 20s from Glenn Maxwell and Moises Henriques, and a cameo from Marcus Stoinis lifted Australia to 194 for 5, which wasn’t to prove enough. 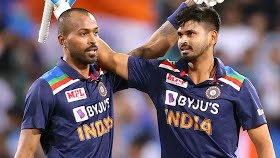 Speaking after being named man of the match, Pandya felt that T. Natarajan should have been named player of the game. “I thought Natarajan would have been Man of the Match, he gave us a target about 10 runs lower than it would have been,” the all-rounder opined. The left-arm seamer claimed 2 for 20 in four overs.

On how he planned his innings in the tough chase, Pandya explained, “It's pretty simple. I really like to see the scorecard and play. It lets you know the kind of shots and options you have. All my matches, I've realised you always have more time than you realise in T20 matches. No matter the target - we've got 80-90-100 in the last five before, and I take confidence from that. As a unit we believe in playing positive, it gives everyone a chance as well.”

India will look to seal the series 3-0 when they face Australia at Sydney again on December 8.