India defeated Sri Lanka by 21 runs in the opening ODI at Hambantota. Irfan Pathan and R Ashwin played a key role for India taking two wickets each and keeping the scoring under a check.

India defeated Sri Lanka by 21 runs in the opening ODI at Hambantota. Irfan Pathan and R Ashwin played a key role for India taking two wickets each and keeping the scoring under a check. Sri Lanka went onto lose the match despite Kumar Sangakkara's 14th ODI century.

The run chase of 315 for Sri Lanka started on a shaky note. India seemed to be in huge trouble when Virender Sehwag in the very first over dropped a sitter at first slip to give an early life to the dangerous Tillakaratne Dilshan off Zaheer Khan. Fortunately for India, Dilshan (6) didn’t last long as he got out lbw going back to a late inswinger from Irfan Pathan in the 2nd over. Sri Lanka after this early blow took the cautious approach in the next few overs through the pair of Upul Tharanga and Kumar Sangakkara. Zaheer and Irfan disappointed with the second new ball by giving away too many wides.

By the 19th over, India found its second breakthrough when R Ashwin got the ball to turn away with bounce to force Upul Tharanga (28 from 47 balls) to edge his cut to slip to end a 77-run stand. As the overs ticked by, the required run rate kept on climbing and that accounted for the wickets of Dinesh Chandimal (13, caught behind steering an outswinger from Umesh Yadav) and Skipper Mahela Jayawardene (12, lbw to an arm ball from Pragyan Ojha in a predetermined paddle sweep). Sri Lanka slipped to 132 for 4 by the 29th over.

By the next 10 overs, India sustained its control on the game by removing Angelo Mathews (7, caught at point after trying to go big off a slower one from Zaheer) and Lahiru Thirimanne (7, lbw to a carrom ball from Ashwin which defeated a flick shot around leg). Although Kumar Sangakkara got to a century by this time, Sri Lanka had batted itself out of the contest at 191 for 6 in the 39th over.

Sri Lanka needed 122 runs from the last 10 overs and it was only a matter of reducing the margin of defeat for the hosts. Sangakkara finally decided to play his big shots and with Thisara Perera striking the ball cleanly, Sri Lanka hopes were raised again. The two left-handers added 76 runs in nearly 9 overs before Umesh Yadav managed to clean up Sangakkara (133 from 151 balls with 12 fours) round his legs in an attempted paddle to fine leg. Thisara Perera perished in the 49th over, slogging Irfan Pathan to long on after a cameo of 44 (from 28 balls with 3 fours and a six).

The homeside finished their innings at 293 for 9 with Lasith Malinga scoring a cameo of 19* from 10 balls with a four and 2 sixes. Umesh Yadav suffered from Malinga’s blow to end up with expensive figures of 2 for 76 in 10 overs. The heroes for India were Irfan Pathan (10-1-37-2) and R Ashwin (10-1-46-2). As expected, the Player of the Match was given to Virat Kohli for his sparkling century. 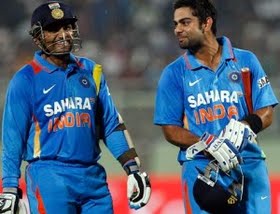 Sehwag, Kohli power India to 314: India piled up a huge total of 314 for 6 against a toothless Sri Lankan attack on a slow pitch at Hambantota. Virat Kohli registered his 12th ODI century and Virender Sehwag narrowly missed out on his 16th ODI century as India got a perfect launching pad from the two right handers.

Lady luck was all the way with Sehwag until it eluded him on 96 to end his stay through a run out. Sehwag had a life even before he had opened his account after a straightforward chance at point was dropped by Dilshan in a square cut off Lasith Malinga in the 2nd over of the match. Just a few balls later, Dilshan failed to seize on a run out opportunity as India seemed to have got off to a shaky start. In the 3rd over, Nuwan Kulasekara found the breakthrough for the hosts as Gautam Gambhir (3) was bowled round his legs in a backfoot flick with the ball somehow ricocheting off his thighpad onto the stumps.

India got going after a sluggish start with Sehwag and Virat Kohli getting the measure of the pitch. In the 11th over there was a decisive moment when Sehwag drove a full delivery from Perera to get caught by a diving Kulasekara at mid off but got the benefit of doubt from the TV Umpire as replays couldn’t confirm if that was a clean catch. Sehwag after this didn’t look back and along with Kohli got a huge partnership. Both batsmen were so confident that they even took the batting powerplay as early as in the 17th over although they didn’t quite go berserk.

It was only in the 32nd over that the second wicket stand worth 173 runs was broken when Sehwag at the non-striker’s end was sent back from a single and the bowler Perera collected the ball to his left and fired a direct throw at the bowling end. With that Virender Sehwag (96 from 97 balls with 10 fours) lost his wicket in a freakish manner. India had a slight stutter after this when Rohit Sharma (5) got bowled through the gate when he was late to an off cutter from Angelo Mathews in the 34th over with India at 191 for 3. Virat Kohli’s knock came to an end just before the start of the slog overs when he drove a slower full toss from Perera into the hands of covers. Kohli finished with 106 from 113 balls (with 9 fours) to take India to 228 for 4 in 40 overs.

India did very well to get 86 runs in the final 10 overs with Suresh Raina and Skipper MS Dhoni taking their time initially on the slow pitch but just at the right time getting hold of their big shots. Raina made a crucial 50 (from 45 balls with 3 fours and a six) and MS Dhoni got 35 (from 29 balls with 3 fours and a six) before both the batsmen got out in consecutive deliveries in the final over bowled by Perera.

Sri Lanka got nothing right on the field. They lost their key bowler Nuwan Kulasekara (5-0-20-1) through a groin injury which he had picked up while attempting a diving catch. The experienced Lasith Malinga was off colour as he went for as many as 83 runs in 10 wicketless overs!

Toss and Teams: India has won the toss and elected to bat first under windy conditions in the opening ODI at Hambantota. The visitors have gone in with two quicks in Zaheer, Umesh, twp spinners in Ashwin, Ojha and with Irfan Pathan in the role of an all-rounder.

Sri Lanka have brought in Rangana Herath who takes the place of Jeevan Mendis. The pitch for this game looks dry and hard. It could assist the spinners as the match goes on.