Pakistan beat Netherlands by six wickets in match number 29 of the ICC Men’s T20 World Cup 2022 in Perth on Sunday, October 30. Pakistan had to win this Group 2 Super 12 game to stay in contention for a place in the semi-final of the ICC event.

Batting first after winning the toss, Netherlands struggled against Pakistan’s pacers and spinners and managed only 91 for 9 in their 20 overs. Leg-spinner Shadab Khan stood out for Pakistan with figures of 3 for 22, while Mohammad Wasim Jr claimed 2 for 15.

Shaheen Afridi got the first break for Pakistan, dismissing Stephan Myburgh (6) with a short ball that the Dutch opener could only top edge. Bas de Leede (6) then had to retire hurt after being hit on the grille of the helmet by Haris Rauf. Shadab then claimed three quick wickets as Netherlands collapsed to 61 for 4. Tom Cooper (1) pulled a poor delivery to deep midwicket, Max O'Dowd (8) was trapped lbw by a googly, while Colin Ackermann (27) missed his reverse sweep and was also leg before. 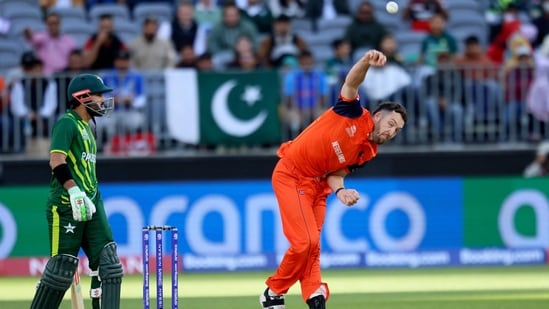 The Pakistan pacers then took over. Dutch captain Scott Edwards (15) guided Naseem Shah straight to fine leg. Rauf cleaned up Roelof van der Merwe (5), while Mohammad Wasim knocked over Tim Pringle (5) and Fred Klaassen (0) with yokers off consecutive deliveries. Paul van Meekeren was run out for 7 as Netherlands finished on a sub-par score.

In response, Mohammad Rizwan (49 off 39) guided the chase. Babar Azam was run out for 4, looking for a quick run, while Fakhar Zaman contributed 20 off 16 before perishing to Brandon Glover. Shan Masood also fell to the same bowler for 12, with the scores level. Shadab then came in to hit the winning runs.

Speaking after being named Player of the Match, Shadab said, “I just tried to bowl it at the stumps, that was my plan, just to keep it simple. I have bowled against few of their players in county cricket, so I know how they play. All our bowlers bowled well. The fast bowlers put pressure in the powerplay, and I took wickets because of that pressure built. We didn't finish the game well in the last couple of matches, but we managed to do it today.”