Miller, Mandeep power Kings XI to a thrilling win over Pune in a high-scoring contest

Kings XI Punjab pulled off the best chase of IPL 6 tonight at the PCA Stadium in Mohali courtesy of a blistering knock under pressure from South African David Miller.

Kings XI Punjab pulled off the best chase of IPL 6 tonight at the PCA Stadium in Mohali courtesy of a blistering knock under pressure from South African David Miller. The job wasn’t all done by Miller as there was a significant contribution coming from opener Mandeep Singh, the local Punjab cricketer who scored an unbeaten 77. As a result, Kings XI Punjab upset the Pune Warriors with one ball to spare to collect their third win in 6 games.

Asked to bat first after losing the toss, Pune Warriors surprised everyone by piling up a huge total of 185 for 4 on a pitch that was very green. However, the grassy patches were on the middle of the pitch which needed the bowlers to come up with half trackers. Robin Uthappa and Skipper Aaron Finch had little trouble against the new ball to come up with yet another good start for the PWI, this time putting up 83 runs in 10.3 overs.

Uthappa scored 37 from 33 balls while Finch laid the impetus with his 42-ball 64 with 8 fours and 2 sixes. Yuvraj Singh showed some form with a 24-ball 34 with 2 fours and 3 sixes. But the real match changing innings came from Luke Wright who came up with a blinder of 34 from just 10 balls with 6 fours and a six. 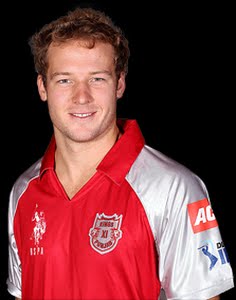 Kings XI Punjab seemed to be heading towards a defeat after losing two early wickets of Gilchrist and Azhar Mahmood chasing the tough target of 186. But they bounced back strongly with Mandeep Singh batting well and David Miller who came in at no.4 hit the ball cleanly to keep the equation under a check. The duo took the match to the last over with 16 runs needed to win. The first two balls of the final over from Wright went for just singles but the third one sailed for a six from Miller which reduced the equation to a manageable 8 from 3. Miller in the penultimate ball clobbered a full toss over long off to clinch the game.

David Miller scored the innings of this IPL – a match winning 80* from just 41 balls with 5 fours and 5 sixes. Mandeep Singh remained unbeaten with an impressive 77* from 58 balls with 7 fours.

Toss and Teams: Hosts Kings XI Punjab have won the toss and asked Pune Warriors to bat first at the PCA Stadium in Mohali. The Pune Warriors have a new Captain in Aaron Finch with Angelo Mathews and Ross Taylor missing out.