Why India must rethink their team composition for Hyderabad

The emphatic win at Chennai emboldened skipper MS Dhoni enough for him to proclaim that India have found the settled team combination for the rest of the series. Even though the win was built around a solid team effort, one wonders whether Dhoni has been too premature in his assessment of the team composition.

The emphatic win at Chennai emboldened skipper MS Dhoni enough for him to proclaim that India have found the settled team combination for the rest of the series. Even though the win was built around a solid team effort, one wonders whether Dhoni has been too premature in his assessment of the team composition. The series is only one Test old, and Australia might well put up a significant improvement in the second Test at Hyderabad, as a result of which India’s weaknesses, especially in the bowling, department could be exposed. This is why it is crucial for Dhoni and the team think tank to reassess the squad once over again.

There is more than one reason why keeping Pragyan Ojha out of the eleven could prove to be hazardous for India. First and foremost, India managed to overcome the Aussie batting challenge at Chennai primarily because of a one-man show. Ravichandran Ashwin had a wonderful Test with the bowl in both the innings and bamboozled the Australians with his variations. Knowing the Aussies well, they would come hard at the tall off-spinner in the upcoming Test, and this is where India would need the services of Ojha more than ever. 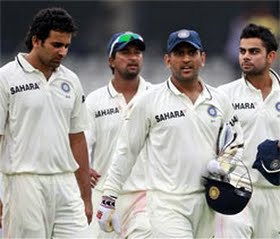 True, India have Harbhajan Singh back in their ranks, but this off-spinner is not the turbanator who can run through opponents. The Harbhajan of present can keep things tight by bowling a good line and can, at best chip in with a few wickets, and that too if he gets assistance from the pitch. Even at his peak, Harbhajan relied a lot on the surface to grab wickets at home. In recent years though he has lost that spite, and possibly even the confidence of the captain. Harbhajan has been brought back into the series because of the psychological edge he holds over the Aussies, but how long they persist with him remains to be seen.

Dhoni does have a point when he mentions that having Ravindra Jadeja in the playing eleven strengthens their batting while give them a left-arm variation with the ball. At the same time, Jadeja is not in the same league as Ojha as a bowler. Hence if either Ashwin or Harbhajan, or in worst case scenario both, struggle in the second Test, India will have nowhere to look forward. To get Ojha back in, India must show faith in their lower-order batsmen. Ashwin and Harbhajan are capable batsmen, who have the experience to register big scores.

Another alternative is dropping one of the pacemen, and drafting Ojha in as the third spinner while retaining Jadeja as back-up. At first sight, this might seem as a radical move, but if India are anyways preparing pitches that turn square from day one, what is harm in taking advantage of the same and packing the team with spinners? In any case, the faster men did not have much to do at Chennai. The bottom line is that India must find a way to get Ojha into the playing eleven, for the team composition appears awry without him, even though Dhoni may think otherwise.