The target in sight for SRH was just 132, but RCB made a close game out of it with their leg spinners bowling tight lines. However, the experienced duo of Williamson and Holder carried them home, and booked a ticket in the qualifier-2 with the Delhi Capitals.

Virat Kohli himself came to bat alongside Padikkal, after losing the toss and being put into bat. The move didn’t work out, as he was strangled down the leg side by Holder. Fellow opener Padikkal was all at sea and succumbed to Holder only for a solitary run. Finch, making a comeback in this knockout match, was batting at one down, and combined with de Villiers to forge a useful partnership.

The pair’s strike rate wasn’t impressive though, as RCB could score only 54 at the halfway stage. Nadeem scalped Finch for a 30-ball 32 and Moeen Ali was run out first ball by Rashid as RCB were in deep trouble. The onus was on AB yet again to push his side to a respectable score, and he targeted one boundary per over in the middle stage. Rashid went wicketless today, but kept the scoring in check as he gave only 22 runs from his quota of four overs. AB got to his fifty soon after that, even as wickets were falling from the other end. Dube and Sundar were dismissed cheaply, and de Villiers was cleaned up by a Natarajan yorker as RCB’s hopes for a strong finish went for a toss. Siraj, Saini hit a boundary each in the final over, with RCB’s score reaching 131-7 at the end of 20 overs. 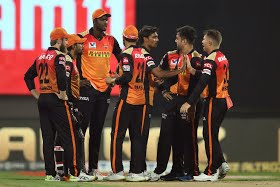 SRH had chased a similar score against RCB in about 14 overs not too long ago, and would have hoped to do the same today too. However, in knockout matches, low scores can be tricky to chase, and SRH are no stranger to that. Goswami, playing in place of the injured Saha, got out for a duck as Siraj drew first blood for RCB. Manish Pandey and David Warner started on a positive note and runs were coming thick and fast. Warner, after hitting consecutive fours off Siraj, got out after a lengthy and controversial review.

At the end of 6 overs, SRH were comfortably placed at 48-2, and were cruising along. However, it were the RCB wrist spinners who turned the game on its head. Adam Zampa gave only two runs from his first two overs and also picked up the important wicket of Pandey. Chahal too got into the act and dismissed Priyam Garg for a 14-ball 7. The required rate rose to 8.5 per over around the 13 over mark, but SRH had the cool heads of Williamson and Holder at the crease.

Williamson was taking some calculated risks with his slog sweeps against Sundar and Chahal going for sixes. He followed it up with fours against Dube and Saini as he never allowed the required rate to go out of sight, also got to a crucial fifty in the process. With 18 required from the final two overs, Holder got lucky with an edge that raced to four at third man. He finished the game with consecutive fours in the final over as RCB got knocked out of the tournament. Scorecard