The third day of the Cape Town Test at Newlands began with South Africa having only one goal in hand – to bat as long as possible, and lose as few wickets possible

The third day of the Cape Town Test at Newlands began with South Africa having only one goal in hand – to bat as long as possible, and lose as few wickets as possible. For that to happen, they needed their two overnight batsmen, who were incidentally their two most experienced batsmen, to bat for a majority of the day. On paper, the task was pretty simple, but implementing it on the field was not going to be as straightforward even as the pitch at Newlands was much more batsman-friendly as the one at Durban. So, how did South Africa fare? Almost to perfection.

South Africa began day two at a decent 141 for 2, but ended it on a much more impressive 353 for 3. Only 212 runs were scored by South Africa in another tough day in the office for the hosts. They ended the day still trailing by a huge margin of 276 runs. However, the most significant statistic of the day was that South Africa only lost one wicket during the entire day’s play. The three players who spent time out in the middle, Hashim Amla, AB de Villiers and Faf du Plessis ensured that South Africa went into day four with a reasonable chance of saving the Test. 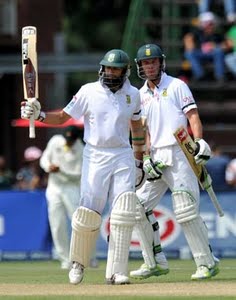 Without doubt skipper Amla was the star of the day. His performance was in stark contrast to the one of Ben Stokes the previous day, who absolutely smacked the daylight out of the South African bowlers. But, Amla’s innings was on expected lines. What mattered most though was that he spent time out in the middle, and batted out the entire day to compile a marathon innings, something which he had failed to do in the last year and a half. Amla batted with the composure of old, and he and the entire South African outfit will be pleased with the start Amla has made to the New Year.

Amla was well supported by de Villiers for a majority of the day’s play. As he did in the Delhi Test, de Villiers curbed his natural instinct, and hung around to take South Africa to a safe position. De Villiers has always been known as an attacking player, but his 88 at Cape Town was another example of how he can rein in his game when the situation demands. De Villiers held the Englishmen at bay for nearly 300 minutes before a pull meant he missed a well-deserved century. After de Villiers’ departure, du Plessis (51 not out) continued the rear-guard action for the hosts.

While South Africa showed commendable resoluteness on the day, England would be ruing the missed chances that allowed the Proteas to blossom slowly but steadily. While de Villiers was dropped by Joe Root off James Anderson the previous day, it was a role reversal as Amla was dropped on 76 half an hour before lunch. The South African skipper was again dropped on 120 as Nick Compton put down a reasonable chance at backward point off Steven Finn. Amla ended the day unbeaten on 157 from 371 balls. The fourth wicket partnership was worth 85, and the Proteas had clearly fought hard.