Jadhav: Team backed me in difficult times, my turn to pay back

Kedar Jadhav, the man of the match in the first ODI against Australia, has stated that the team management has clearly told him his job is to bat at number six

Kedar Jadhav, the man of the match in the first ODI against Australia, has stated that the team management has clearly told him his job is to bat at number six and be a finisher. Jadhav starred with an unbeaten 81 and featured in an undefeated 141-run stand with MS Dhoni to take India over the line after a middle-order collapse.

“It’s good to be consistently playing for India and doing well. Everybody is encouraging towards me, irrespective of how many times I have got injured. Every time I have got fit, I have walked into the team,” Jadhav was quoted as saying in an ICC report, praising the team management. 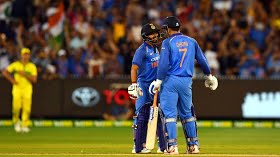 While India have tried out the likes of Rishabh Pant, Dinesh Karthik in the lower middle order, Jadhav has all but booked his spot with his effective batting coupled with his knack of breaking partnerships with his innocuous deliveries.

“It’s more than one-and-a-half or two years. Till 2017 January against England in India, I batted at No. 6. From there, the management was looking at me as a finisher.

“They have clearly told me that, ‘you will be batting at No. 6 till the time you are there’. The management has been clear about everybody’s role, and everybody is clear about what is expected of individual players,” Jadhav further said in the ICC report.

The second ODI will be played at Nagpur on Tuesday.