Focus: Why Amit Mishra must make his comeback count

Ravichandran Ashwin was India's go to bowler in the series against Sri Lanka, but some credit for his success should also go to domestic veteran Amit Mishra

Ravichandran Ashwin was India's go to bowler in the series against Sri Lanka, but some credit for his success should also go to domestic veteran Amit Mishra, who gave him excellent support from one end. They say that bowlers hunt in pairs, and this adage proved to be right once again as India overcome Sri Lanka by winning the battle of spin. If Ashwin was by far India's best bowler in the series, Mishra was only behind him. Both complemented each other very well as for the first time since the Harbhajan Singh-Anil Kumble combine was separated, India found a reliable spin bowling combo. Their success reflected in that of the team's as well.

When Mishra was chosen for the Lanka series, a number of eyebrows were raised. After all, he was 32, wasn't getting any younger, and hadn't played a Test for a few years. Critics also pointed out that the third spinner chosen, Harbhajan was also 35, and thus it seemed like this was a team living in the past. In Harbhajan's case, the prediction did turn out to be true as he looked totally ineffective in the only Test that he featured in. On the other hand though, Mishra certainly made his opportunity count, and bowled with good guile and rhythm to make an impact on the Lankan batsmen. His dismissal of Dinesh Chandimal, bowling him round the legs, was possibly the best of the series. 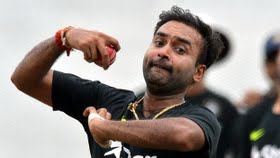 Mishra's comeback to Tests can be termed as fantastic, and one that could resurrect his career even at this late stage. His performance in Sri Lanka exhibited the experience he had gained in domestic cricket over the years, and he was clearly a different bowler than earlier seen when he played for India. What was striking about Mishra's performance in the island nation was that he varied his pace very well, something he had not been adept at during his early days in his international career. Also, Mishra displayed excellent control as a leg-spinner, another failing that had let him down previously in international cricket.

The career-turning effort in Sri Lanka has gained Mishra a comeback in the shorter formats as well, and it is not up to him to make full use of the opportunity, for he won't get many more chances at comeback if he falters this time. To be fair to Mishra, he hasn't always been given the deserved treatment by the selectors. During the last World T20, he was among the best bowlers in the tournament, but struggled in the semi-finals and finals, following which he wasn't given many more opportunities, which should not have been the case. But, Mishra seems to have put the past behind him, and has started afresh, which is the right way to go about things.

In the current scheme of things, Mishra fits in very well. In Tests, with the management now keen on playing five bowlers, Mishra is a valuable member, specifically since he has improved his batting tremendously in recent years. Although he cannot be termed as an all-rounder, both he and Ashwin gel well in the five-day team since they both are class bowlers who can make significant contributions with the bat. This does not apply completely to the ODIs and T20s since their batting is not suited to those formats. Also, Mishra in particular, isn't a swift mover in the field. But, that shouldn't be enough to keep him out of the shorter formats, at least not on current form.