Irfan Pathan out with knee injury

India’s limited overs all-rounder Irfan Pathan has suffered a knee injury which he sustained during Baroda’s Ranji Trophy match against Karnataka. The injury it seems is not that serious and is likely to keep him out for just one Ranji match. The 27-year-old who only recently got his place back in the Indian team heads to the National Cricket Academy in Bengaluru for rehabilitation.

Irfan Pathan made a wonderful contribution in the Ranji match at Vadodara by rescuing his side from a precarious situation of 88 for 4 with a superb knock of 121. In the second innings he scored 38. 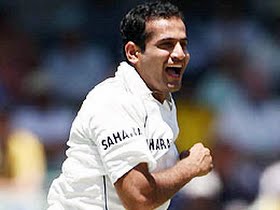 But in the most important part of his game which is his left-arm swing bowling, Irfan managed to take 2/64 in 25 overs and did not bowl in the second innings of Karnataka.

It was reported in a leading newspaper that Irfan Pathan was having a swollen knee from the second day’s play according to Baroda’s Coach Sanath Kumar. Irfan was also a part of the India A team that played in England’s first warm-up match at Mumbai. The all-rounder had therefore continuously played for seven days in a row.