That Mumbai won the most prestigious Indian domestic tournament for the 40th time wasn’t surprising. The manner in which they fought throughout the series to lay their hands on the trophy though was outright inspiring.

That Mumbai won the most prestigious Indian domestic tournament for the 40th time wasn’t surprising. The manner in which they fought throughout the series to lay their hands on the trophy though was outright inspiring. There were many moments during the season when one wondered whether this would turn out to be another disastrous outing for the team that has lifted the trophy most times in the tournament’s history. There was a phase when they were on the verge on being knocked out but hung on almost miraculously and, at the end of the day, deserved grabbed the champions crown.

The reason why Mumbai managed to overcome many hurdles during their journey was because they found a hero for every tough occasion. Consider this –they drew their first six games of the season against much weaker sides. In their seventh clash against Madhya Pradesh, things seemed to be following a similar path. It was a must-win situation for Mumbai if they had to stay alive in the tournament. Zaheer Khan and Abhishek Nayar then called upon all their experience to scuttle MPs’ challenge on the final day. MP won a lot of hearts for their resolute effort, but for Mumbai, the result, a narrow win by seven runs, mattered the most. 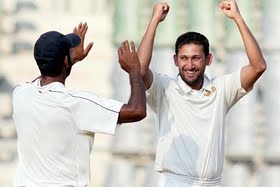 The quarter-finals against Baroda saw the Mumbai stalwarts standing up and delivering. Wasim Jaffer continued his great form, striking another pleasing hundred, while Sachin Tendulkar, who was returning to domestic cricket after a prolonged absence, came up with a ton of his own. Abhishek Nayar also chipped in with a hundred, ensuring Mumbai put up a huge first innings total on board. The solid batting effort was proof of the team’s growing confidence and was enough to take Mumbai into the semis.

The semi-final against the unheralded Services was another major challenge for the eventual winners. Batting first, they found themselves in all sorts of trouble but skipper Ajit Agarkar played the innings of his life, and with excellent support from Aditya Tare, rescued the side from severe danger. Dhawal Kulkarni then came up with a magnificent spell with the ball to thwart any chances of a fight back from Services. And once Wasim Jaffer delivered with a record ton in the final after Mumbai had skittled out Saurashtra cheaply, the trophy was Mumbai’s for the taking. Kulkarni and Agarkar combined to finish off things. The dismissive manner in which they outdid Suarashtra was proof of how badly Mumbai wanted to lift the trophy.

The victory was sweeter for two stalwarts of Mumbai cricket. Wasim Jaffer, who faced a lot of criticism from his own coach over his ‘defensive’ leadership and failures with the bat, came back as a pure batsman and delivered as only he could. The second inspiring tale of was the skipper himself. Having been dropped on the eve of a match last season, Agarkar flew back home. This season, he returned as skipper, and boy, did he make a difference. Kudos to the Ranji champs!