Analysis: Why the Cape Town draw was a much-needed result for South Africa

The series scoreline may still read that England lead the four-match series 1-0. There was no come-from-behind triumph for South Africa at Cape Town, Newlands

The series scoreline may still read that England lead the four-match series 1-0. There was no come-from-behind triumph for South Africa at Cape Town, Newlands. And yet, South Africa will come out of the second Test as the happier side. At times, you need to look beyond the stats, and form an opinion on what kind of impact a victory, a defeat or even a draw, like the one at Newlands, can have on the psyche of a team. It was that kind of a Test for South Africa at Cape Town. Although England survived, it was nothing short of a moral victory for the hosts.

What would please the South Africans most about their fightback in the second Test is that they turned the match around after being clubbed for 629 bowling first. Ben Stokes’ bludgeoning 258 was the kind of knock that would kill the enthusiasm of most opponents. After being subject to such a harsh treatment by Stokes, not many expected the Proteas to be in the right frame of mind to battle it out. And, one couldn’t fault the experts. South Africa were coming off an insipid loss at Durban, preceded by the 3-0 drubbing in India. This is precisely why the draw means much more for the hosts. 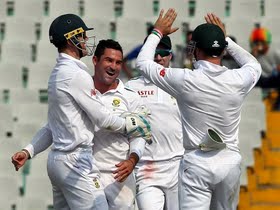 One has to give it to the South Africans for the fitting reply they gave to the Englishmen when it was their turn to bat. True, the pitch at Cape Town was easier to bat on than the few the Proteas have encountered in recent times. Still, coming out to bat having been plundered for 600 plus is never easy. The South African batsman applied themselves commendably, and the same batsmen who struggled to stick around in the previous matches, put their hands up and delivered. South Africa would be equally elated that their bowlers ended up putting England under pressure on the final day.

South Africa can take out numerous positives from the Cape Town Test -- the biggest of all, without doubt, was the resolute double hundred by Hashim Amla, who has stepped down as leader of the Test side. Amla’s double ton was in complete contrast to Stokes’, but no one ever expected anything different. The Proteas would just be ecstatic with the fact that Amla is back among the runs after an uncharacteristically long dry run. It was a typical Amla innings in which he bore out the English. Temba Bavuma’s maiden ton and half-centuries from Faf du Plessis and Chris Morris were added bonuses.

South Arica’s bowling effort in the second innings completed the turnaround, and signalled the reversal of fortunes in the Test. Having piled up 629, England would not have imagined in their worst nightmare that they would be under pressure to save the Test on day five. But, that situation became a reality, first thanks to the South African batsmen, and later due to Dane Piedt, who preyed on England’s nervousness. The visitors would rue the number of missed chances that had a role in bringing England to such a precarious situation. England were lucky to survive, but South Africa, for sure, have come alive again.