India completed a 2-0 victory over West Indies with yet another comprehensive triumph at Jamaica by 257 runs. The victory made Virat Kohli India's most successful Test captain

India completed a 2-0 victory over West Indies with yet another comprehensive triumph at Jamaica by 257 runs. The victory made Virat Kohli India's most successful Test captain -- with 28 wins, overtaking MS Dhoni.

Apart from a 61-run stand between Shamarh Brooks and Jermaine Blackwood, the later coming in as a concussion specialist for the injured Darren Bravo, West Indies never gave too much of a resistance in the improbable chase of 468.

Once the stand was broken, West Indies quickly tumbled from 159 for 4 to 180 for 8. They eventually folded up for 210, with Mohammed Shami and Ravindra Jadeja claiming three wickets each. 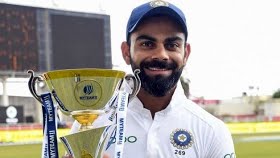 Post the victory, Indian skipper Virat Kohli said his record was due to the team's effort reiterating yet again that a captain is just as good as his team. "Captaincy is just a 'C' in front of your name honestly. It's the collective effort that matters. It's a by-product of this quality team that we have here, to be honest. If we didn't have the bowlers that we have, I don't think the results would have been possible," Kohli said at the post-match presentation.

The Indian skipper was effusive in his praise of Jasprit Bumrah, who has taken Test cricket by storm within a short span of time. The Indian pacer claimed a five-for in the first Test, and added a six-fer in the second, which included a hat-trick.

"When he gets some kind of momentum, you can see what he can do in five-six overs with the new ball, which you saw in the first innings. I haven't seen many more lethal spells than that two spells in the last couple of Tests. As a batsman standing in slips, you can feel for the batsmen who's playing him.

"He confuses them with angles, with swing, he will set up for the out-swinger and then bowl the in-swinger. It's coming at pace and then he can hit you with bouncers as well. I think he's the most complete bowler in world cricket now," Kohli went on to add.

Kohli was also pleased with the way Hanuma Vihari grabbed his opportunity with a hundred and two fifties in the series, after there was some debate over him being chosen over Rohit Sharma in the playing eleven.

"I think the find of the series was Hanuma Vihari. The way he's batted under pressure especially, and on a much more challenging wicket here in Jamaica than in Antigua. I think his skill sets were outstanding. I think his temperament and technique were top-notch and he countered everything the opposition threw at him. Very, very pleased with the way he has come about," Kohli admitted.

On being asked about the secret of his team's success, Kohli explained that their ability to soak pressure has been the key. "When put under pressure, find ways to come out of those situations and really put the situation in your team's favour and then capitalise when the pressure is on the opposition. I think we have done that really well. As a Test team, I think we are placed really nicely," the Indian captain went on to add.