Speaking about the dependable India no 3, Vijay was quoted as saying in a PTI report, "Pujara has the game for it. He takes a lot pressure. His game is such that you can depend on him and play your natural game. It goes hand in hand. We both are in good form as well, so it helps the team at the moment.”

Vijay and Pujara added 102 runs together for the second wicket. Vijay’s contribution was 82, but he gave it away at the stroke of lunch. About his dismissal, Vijay explained, "I was not disappointed actually because the shot was on. With mid-on, mid-off inside, I thought it was my shot but situation was wrong I guess and the execution was not up to the mark. 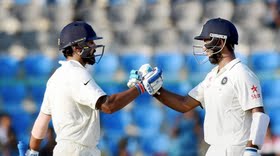 "The previous ball before I got out, I saw there was not much spin. I thought fine, there was scoring opportunity for me. I backed my instinct but it did not come out my way," he added.

India are still 91 runs behind and only have four wickets left. About the situation, Vijay analysed, "I think the game is evenly-poised. If we can get closer to the target and may be if possible extend a lead from there, it would be a good game in hand.”

Vijay also supported Kohli, who was surprisingly struggled in the series, "He's a world class player. To judge any player on two three innings is unfair. It's just a matter of time for him to get back into runs. I think it would be sooner than later," Vijay said about Kohli.