Bowling, fielding made the difference for Lanka in Sydney T20I

After squaring the one-day series, Sri Lanka have now ensured that they will not lose the two-match T20 series as well, defeating Australia in a hard-fought encounter at Sydney on Saturday.

After squaring the one-day series, Sri Lanka have now ensured that they will not lose the two-match T20 series as well, defeating Australia in a hard-fought encounter at Sydney on Saturday. On a drop-in pitch where batsmen from both sides struggled to deal with a sluggish surface, the Lankans performed well with both bat and ball and were significantly better in the field, as a result of which they managed to restrict the Aussies to a low total. While chasing the target too, the Lankan batsmen had enough determination to stick around and take the side home under somewhat tense situations.

Australia’s below par batting it was that cost the hosts the game. True, it wasn’t a great surface to bat on, but David Warner showed that with some determination runs could be scored on the pitch. The fact that Warner remained unbeaten on 90 (off 62 balls) out of a total of 137 told a story in itself. Although the southpaw hit five boundaries and three sixes in his knock, it was the manner in which he held the innings together that was most impressive. If only some of the others had showed the kind of application that Warner did, the game could have taken a different turn. 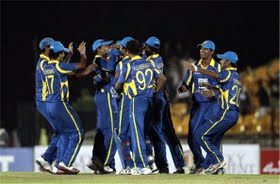 The overall performance of Australia with the bat was highly disappointing. Aaron Finch got another to prove his worth in international cricket, but failed in his endeavour yet again. A lot was expected of Shaun Marsh on his return, but he was clearly out of sorts. He struggled for 17 balls for his 6 before being brilliantly run out by Tillakaratne Dilshan, an example of Sri Lanka’s penetrative fielding on the day. Skipper George Bailey couldn’t turn the game around for the hosts either While Adam Voges scored at less than a run-a-ball, leaving Warner fighting a lonely battle.

Sri Lanka’s bowling was sharp right from the start, and they did not allow the Aussies to get into any sort of position to dominate. Although they picked up only three Australian wickets, it did not matter much as the home team could not get the bowlers away. Nuwan Kulasekara kept things extremely tight, and also claimed an early wicket. On the other hand, Lasith Malinga went for less than five an over is his quota, a clear indication of the struggle Australia’s batsmen went through on the day.

With the bat as well, Sri Lanka outdid Australia. There was no Warner-like knock from any of the Lankan batsman, but they were better as an overall batting outfit, which made the difference between victory and defeat. Of course, it helped that they knew the target. Even so, Kushal Perera, Angelo Mathews, Lahiru Thirimanne and Thisara Perera played the kind of cameos that could have perhapshelped Australia put up a better total on the board. Australia did manage to pick up more wickets that the Sri Lankan bowlers, but they just did not have enough runs to defend.