The Gujarat Titans (GT) will take on the Chennai Super Kings (CSK) in match number 29 of the Indian Premier League (IPL) 2022 at the Maharashtra Cricket Association Stadium in Pune. This will be the evening game of the double-header and hence will begin at 7:30 PM IST.

Gujarat are sitting on the top of the points table with four wins from five matches. In their last game, they crushed the Rajasthan Royals (RR) challenge by 37 runs. CSK are languishing at the ninth position in the points table, just above winless Mumbai. The one good news for them is that they won their first match of the season against the Royal Challengers Bangalore (RCB) after losing the first four games.

GT were led brilliantly by skipper Hardik Pandya in the last game against RR. He cracked an unbeaten 87 off 52 with the aid of eight fours and four sixes. Abhinav Manohar carried on his good form, scoring 43 off 28. In the batting, the form of Matthew Wade and Vijay Shankar will be the big concern for Gujarat. 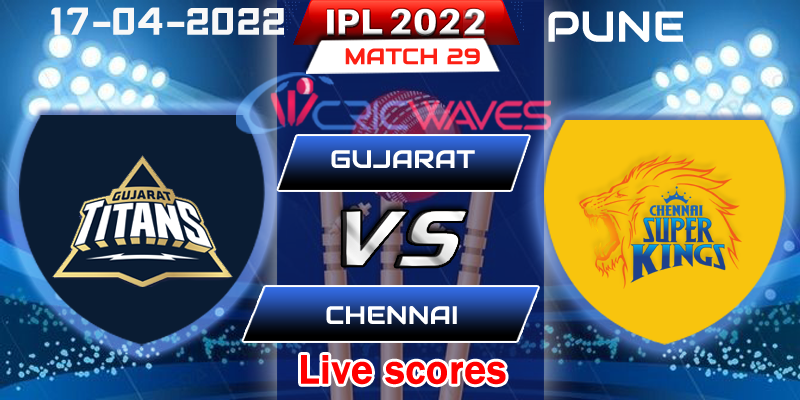 Their bowling looks in fine form. Lockie Ferguson picked up three scalps against RR, including the big one of Jos Buttler. Yash Dayal made an impressive debut while Rashid Khan and Mohammad Shami are doing a great job. Pandya is also chipping in with key overs.

Although they beat RCB in the last game, CSK still have plenty to ponder upon. The won the last match on the basis of some individual brilliance from Shivam Dube and Robin Uthappa. Ruturaj Gaikwad and Ambati Rayudu need to get among the runs while Moeen Ali and skipper Ravindra Jadeja need to deliver like senior pros.

There isn’t much they can do about their bowling, but Maheesh Theekshana’s four-for in the last game will give them confidence. Dwayne Bravo and Chris Jordan will need to be at the best for CSK to make an impact with the ball.