Any loose ball, I just felt like putting it away: Shardul Thakur on scintillating fifty

Shardul Thakur and Washington Sundar were the unlikely heroes for Team India with the bat as the visitors fought hard to stay alive on Day 3 of the fourth Test against Australia at the Gabba. Thakur and Sundar featured in a record 123-run stand for the seventh wicket as India recovered from 186 for 6 to post a competitive 336. This stand is now the highest seventh-wicket partnership for India at Brisbane. Thakur and Sundar broke the record held by Kapil Dev and Manoj Prabhakar, who added 58 runs for the seventh wicket back in 1991.

Australia were at 21/0 in their second innings, with an overall lead of 54 runs. David Warner was unbeaten on 20 runs and Marcus Harris on one.

Shardul and Sundar both scored memorable fifties. Shardul began his innings with a six and also brought up his fifty with a maximum. Ravichandran Ashwin interviewed Shardul, Sundar, and T Natarajan after the day’s play. BCCI posted a video of the same. 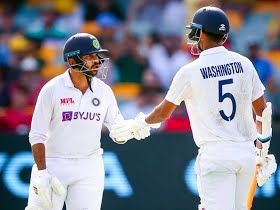 On beginning his innings with a six, Shardul said, “At that time, I did not look to hit six, it was more of a reaction. I saw the ball and played that shot instinctively and it came out well for me."

On his scintillating strokes, Shardul said that everything just came out well. "I have not really practiced those. It was one of those days where I was batting really well and did not want to miss any opportunity. Any loose ball and I just felt like putting it away," he further added.

Shardul was eventually dismissed for 67 runs while Sundar made a fighting 62. For Australia, Josh Hazlewood starred with 5 for 57.