What Jimmy has achieved and what he is capable of achieving still is astounding. For him to have taken as many wickets as he has

“What Jimmy has achieved and what he is capable of achieving still is astounding. For him to have taken as many wickets as he has, chasing the big two spinners, is a phenomenal effort. He's probably bowling at his best. Throughout this summer, he's been outstanding. Hopefully he can keep that going.

To see Jimmy pass Glenn McGrath's record today was just brilliant. I've played so much cricket with him and Broady. That's the hardest bit, knowing you won't play with them again. Or actually it's the easiest bit, knowing I'll never stand at first slip and drop a catch off one of them again.” 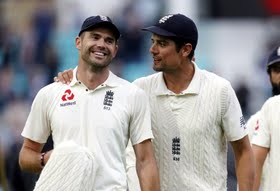 “I said it was written in the stars and for it to turn out as it has, it's fairytale stuff for Alastair to go out like that and Jimmy at the end. For those two guys, who are two really close mates, they're going to miss playing together. It will be different with him not being there but it does create an opportunity for someone else now."

I'm just so pleased he can go out in real style. For it to finish how it has, is pretty special. We've lived in each other's pockets for 12 years. It's been a privilege to play with Jimmy – Cook.”