AUS vs IND 1st ODI Live score: The duo complete a century stand for the second wicket, after Barinder Sran picked up Finch and Warner early.

India's captain MS Dhoni won the toss and chose to bat first against Australia in the opening ODI of their five-match series at the WACA Ground in Perth. 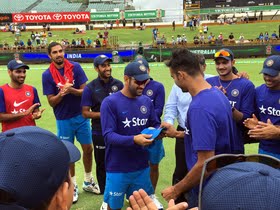 MS Dhoni has won the toss and India will bat first on an overcast morning at the WACA. Dhoni says he is happy with the weather because it has been quite hot in Perth in the lead up to the game. Smith said he was thinking about bowling first anyway, and hopes to make use of the overcast conditions.