Champions Trophy 2017: Can’t do much about weather, says Smith

Steven Smith's Australia once again had to endure rain pain. But, unlike in the game against New Zealand, where they seemed in big trouble, only Monday

Steven Smith's Australia once again had to endure rain pain. But, unlike in the game against New Zealand, where they seemed in big trouble, only Monday, they were just four overs away from clinching victory, when rain robbed them of that chance.

Australia were 83 for one chasing a target of 183 at The Oval. But only 16 overs had been bowled, which does not constitute a game. Australia will now face England at Edgbaston on Saturday in a must-win game.

Reflecting on the result, Smith said, "It was disappointing not to get a win but we can't do much about the weather and we can't control that. The equation is pretty simple for us now." 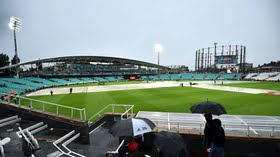 Smith however praised his bowlers. Mitchell Starc was highly impressive with 4 for 29. "I thought all our bowlers were a lot better today. We hit some good areas early on and challenged the defence of the Bangladeshi batsmen. Everyone that bowled I thought did a pretty good job today, and it was nice that we were able to turn things around from the way things went in the first game against New Zealand,” Smith added.

Bangladesh captain Mashrafe Mortaza was happy to take the points. "I think even in the 2015 World Cup, we got one point from Australia and went through - it really helped us. This time we have a chance. You never know. Straightaway, we have to beat New Zealand and obviously we have to wait for a few results, as well. So our job is to play hard against New Zealand and if we can go through, then you never know,” he opined.