India's reign as number one Test team ends, Australia back at the top

Team India's run as the number one Test team in the world is officially over. As per the latest rankings released on Friday, Australia are back on the top of the ratings with 116 points while New Zealand are second with 115. India have slided down to number three with 114 points.

The updated rankings mean India's longest streak at the number one position -- 42 months -- has come to an end. They took over the top spot in October 2016. While this is India's best among teams, they have gone past England's record of 37 months. 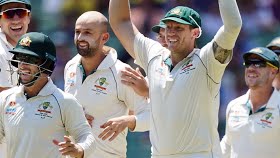 The first two spots are, not surprisingly, occupied by Australia and West Indies. The Aussies were number one for 95 months from September 2001 to July 2009 while the Windies occupied the top spot from 1981-1988, for 89 months.

"India have yielded the top spot for the first time since October 2016. This is largely because India had won 12 Tests and lost just one Test in 2016-17, the records of which were removed in the latest update," an ICC statement read.

"They had won all five series during this period including against Australia and England. On the other hand, Australia had lost to South Africa as well as to India in the same period," the ICC release further added.

While India haven't lost a Test series at home since 2012, and also beat Australia Down Under for the first time in 2018-19, they have tasted defeat in South Africa and, most recently, in New Zealand.

Meanwhile, India remain at number one in the ICC World Test Championship table with 360 points. Aussies are at the number two spot with 296 points. The Championship is currently on hold due to Coronavirus.