Harbhajan slams Pandya, Rahul: We don’t talk like this even with our friends

After suspension, Indian duo Hardik Pandya and Lokesh Rahul have now been slammed by former India cricketer Harbhajan Singh. The Turbanator added that he won't be comfortable having Pandya and Rahul around the women in his family.

"I will not travel with these two guys in the bus if my daughter or my wife are travelling in the team bus with me. How would they feel? You are looking at women in only one angle and that is not right," Harbhajan told India Today. 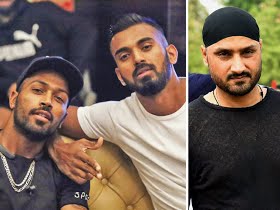 Harbhajan added that Pandya and Rahul's comments have actually put reputation of cricketers on the line.

"We don't talk about all this even with our friends and they were talking on public television. Now people might think was Harbhajan Singh like this, was Anil Kumble like this and was Sachin Tendulkar,” Harbhajan added.

"Pandya has been in the team for how long to talk of the team culture in the manner he did. The BCCI did the right thing, and this is also the way forward. This was expected and I am not surprised," Pandya further said in the India Today report.

Pandya comments about women and sex on Koffee With Karan led to a massive backlash around the country.